Fade to Silver by Catherine Converse 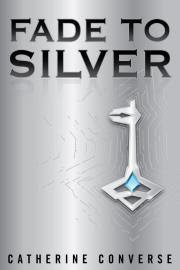 Adie is forced into new territory when her dream overlaps with a complete stranger in a different part of the country, while Dannika escapes from Research, not accepting the new assets in her brain that will change the way she works forever. Despite their separation, their lives merge once again to solve a major corporate conspiracy case, where one man has already lost his life, and Adie has set interference in motion on the next victim in line. But the corporation holds something that is so special, they aren’t the only ones that are willing to kill for it.

With two young men battling for her affection, Adie struggles to keep focus on the case. Once again, Adie and Dannika become the targets, as they become identified as obstacles for those who are after the corporation’s unique discovery. Until it becomes clear that only one person has the power to stop the chain reaction that has begun. And only one question will reveal that person. Who holds the key?

I have to say, I think I enjoyed this installment to the In Between Series even better than the first book.  There were a lot of questions from book one answered - but that doesn't mean that even more questions arose in this book.  Plus, it pretty much starts right where we left off.

There is a wonderful surprise at the end of The In Between where a potential love interest of Adie's ends up working with the same government agency with her.  Not that we didn't see it coming - there were plenty of clues hinting to it in the book.  But I have to admit, this was one "love triangle" that didn't irritate me.  It was hard at times to decide who I wanted Adie to end up with.  I am happy with the result of that... for now.

I loved that we got to see a lot more of Dannika in this book.  It was wonderful to see how she acted before working for the agency (I'm not going to explain this bit because it will really give away too much of the plot), and find it very intriguing how she ended up getting her memory back.  I'm very curious to see how the issues with Dannika plays out in the series.

For information about the Author, please check out my review of The In Between.