Under Her Spell Super Book Blast 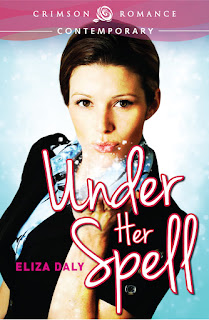 When a series of failed relationships and business ventures have Monica Jackson doubting her self-worth, she turns to spell casting to attract positive energy and the opportunities needed to achieve her goals.  But can Monica’s belief in spells restore her belief in herself?

Monica creates a spell to find her soul mate, and one to ensure the success of her new romantic event planning company, Enhance Your Romance.  Monica is confident she has found her niche until divorce lawyer Reed Walker opens a practice next door to her office.  The anti-marriage slogan plastered on his office window, and his down-on-love clients, quickly prove detrimental to Monica’s business.  When his arrival appears to trigger a string of bad luck, Monica fears one of her spells sent negative energy into the universe and it has returned to her threefold.  Although Reed is beyond sexy, and she admires his self-confidence, she’ll do whatever it takes to get the universe back on her side, and Reed out of her life. No way is she losing another business.

Reed finds himself attracted to Monica’s beauty and her optimism. His job and his parents’ divorce have made him a pessimist, especially when it comes to love. However, he soon finds that Monica’s pro-love attitude is rubbing off on him, causing him to lose his edge.  If Reed doesn’t distance himself from Monica, he’ll likely destroy his reputation as a pit bull divorce lawyer.

Can Monica and Reed look past what they might be losing to realize the love they have found?

“A spell … ” Hope mused, then her face lit up. “If there’s a spell to attract a man to a woman, there must be one to repel women from a man. Right?”

“Spells shouldn’t involve negative energy. Sending out negative energy can cause it to return threefold. They aren’t intended to harm someone or make them do something against their will.” Jordan had drilled this into her head.

“I wouldn’t be making Kyle do anything against his will. I’d be warning women to stay away from him.”

“Please,” Hope whined, picking a clump of batter from her long, wavy hair.

Monica let out a defeated groan. “All right.” Hope would never actually cast the spell anyway. When they were young, Hope refused to wear a Casper costume for Halloween because she didn’t believe in ghosts. She was closed-minded when it came to paranormal or New Age beliefs. And you had to truly believe in a spell for it to work.

Monica set down the bowl of salt and grabbed a pencil and pad of paper off her desk and handed them to Hope. “Write this down. It’s called,” she tapped a hot pink nail against her lip, “the dirtbag spell. Take one of Kyle’s socks, fill it with dirt, and add a photo of him. It’s critical you aren’t in the photo.” Monica paced, tightening the sash on her lavender silk robe. “Include something of his like … ”

Personally, Monica would list the watch on eBay and pray for a bidding war. But Hope, no matter how ticked off, was too timid to sell Kyle’s precious watch, and too frugal to risk damaging it by mixing it with dirt.

“That’s fine. Sew up the sock and bury it in your front yard. It’ll warn all women he’s a dirtbag.”

Hope poised the pencil against her lower lip, reviewing the spell. “Don’t I have to say something when I bury it, like a chant?”

What happened to being spell ignorant?

“Bury it in the moonlight while saying … ” Monica scrambled for a few rhyming lines, “moonlight, glowing bright, warn all women in your sight, the man who lives in this house, is a dirtbag and a total louse.”

“Perfect.” Hope sprang from the bed, looking inspired. “Kyle’s at work. I’m going over to the house right now to bury that sock.” She turned and marched out, a woman on a mission.

Monica nibbled nervously on her fingernail. Hope wouldn’t seriously go through with casting the spell, would she? A big part of spell casting was psychological, focusing all your energy on making something happen. Monica had never seen Hope look so determined, or vindictive. Hopefully, if she did cast the spell the negative energy didn’t return threefold.

What was the worst that could happen?

Eliza Daly has written a laugh out loud romantic comedy!  Seriously, folks!  It's hard to get me actually laughing when reading a book.  A giggle, yes.  But laughing, tear ridden laughter, rarely.    This book is a must read! 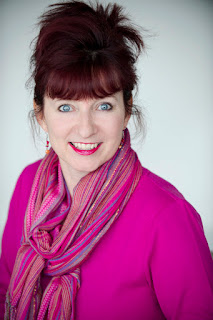 Eliza Daly’s first attempt at creative writing was in fourth grade. She and her friends were huge Charlie’s Angels fans and she would sit in her bedroom at night writing scripts for them to act out at recess the following day. She was Kelly Garrett. Fast forward to the present, she’s still writing stories about beautiful women who always get their men. The journey from fourth grade script writer to published author wasn’t an easy one, but it was always an adventure and the final destination was well worth it.

When Eliza isn’t traveling for her job as an event planner, or tracing her ancestry roots through Ireland, she’s at home in Milwaukee working on her next novel, bouncing ideas off her husband Mark, and her cats Quigley and Frankie.

You can find Eliza on the web at

Under Her Spell is available at

Make sure you leave a comment for Eliza - she will be awarding one $25 gift card and three $10 gift cards for Amazon or Barnes & Noble (winner's choice)!  Each comment you leave during the tour will get you one entry into the giveaway; so make sure you check out each stop and talk away to increase your chance to win!!  The rest of the tour dates can be found here.