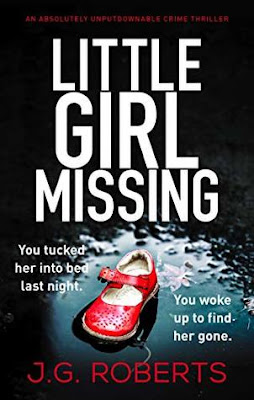 How can a little girl vanish into thin air?

Five-year-old Cassie Bailey's mother tucked her into bed and kissed her goodnight. This morning she's missing, her unicorn bedcovers are empty, and her parents are frantic.

DCI Rachel Hart knows that the first few hours after a child goes missing are the most crucial, and that the Baileys are living every parent's worst nightmare. Rachel knows, because as a child her family lived through it too, when her sister was taken.

The days are ticking by with no sign of Cassie, and the cracks in the Baileys' marriage are beginning to show. But are the holes in their stories because they're out of their minds with panic - or because they're lying?

Rachel's convinced that Cassie knew the person who took her, but can she find the little girl before she's lost forever?

A gripping thriller for fans of Close to Home, The Couple Next Door, and Behind Closed Doors.

There are some good and negative aspects about this books, and I'm going to mention the most obvious because what I don't particularly care for might be what someone else loves!  To get the negative (for lack of a better word) out of the way, I didn't really like the narration.  I was in too many people's heads, and it made it hard to really connect with any of the characters.  There wasn't enough time with one person before we were moved onto the next.  This series is centered on D.C.I. Rachel Hart, and she didn't get as much time as the other characters.  That isn't to say I didn't like her character, because I do.  She is complex, and  I want to know more about her.  But that is the problem.  I should already know what I need to know about her by the end of this book, and I was left feeling like something was missing.

Because the narration takes place with every character of importance in the story, there is really no suspense until the very end (we're talking the last 15-20 minutes of reading).  That was a bit of a disappointment.  I really enjoy being inside the head of a psychopath while reading a good suspense, because it isn't revealed who they actually are until it is revealed that they are the Big Bad.  Even in an audiobook, the narrators change their voices up so as to not give away which character is doing some shady sh*t.  So that really took away from the experience you get while reading this genre.

I'm seriously shocked that this book was compared to Behind Closed Doors because that book is a VERY dark read, and while Little Girl Missing is a good story, and Roberts has some great potential expanding in this genre, the writing and the story are not on the same level.  This story is not going to stick around in my head the way Behind Closed Doors has.  I think this would be better classed as a procedural as opposed to a thriller/suspense.  Going into this book with the expectations that it was comparable to Behind Closed Doors (I have been looking for books like this for ages, and even libraries have fallen short helping with this) is probably part of the reason for the slight disappointment.

All that said, what I loved about this book was the bait and switch a little less than half way through the book.  I am one of those readers (and watchers) that always figure things out before you're supposed to, to the point that it's almost annoying.  I was 100% certain I knew what happened to Cassie by 20% into the book.  And then at 42% that was confirmed.  But then, I was scratching my head because why in the world would this be resolved so early on?  Because it wasn't.  It was a trap, set to give us a false sense of know-it-all, and I fell for it.  Well played, Roberts. Well played.

All in all, it was a decent book, and I would more than likely pick up the next book in the series because I do want to know more about Hart's past with her sister and how she ended up where she is today.  I also think that because this was Roberts' first time writing in this genre that the next book will be better, and I'm looking forward to watching that growth.  There is something about reading a book by an author, and seeing that happen that is so satisfying, you know?