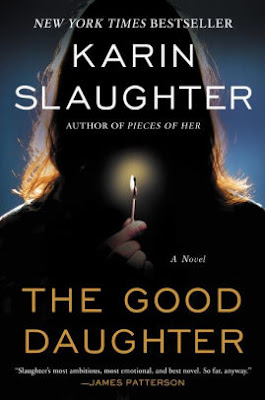 Two girls are forced into the woods at gunpoint. One runs for her life. One is left behind…

Twenty-eight years ago, Charlotte and Samantha Quinn's happy small-town family life was torn apart by a terrifying attack on their family home. It left their mother dead. It left their father — Pikeville's notorious defense attorney — devastated. And it left the family fractured beyond repair, consumed by secrets from that terrible night.

Twenty-eight years later, and Charlie has followed in her father's footsteps to become a lawyer herself — the ideal good daughter. But when violence comes to Pikeville again — and a shocking tragedy leaves the whole town traumatized — Charlie is plunged into a nightmare. Not only is she the first witness on the scene, but it's a case that unleashes the terrible memories she's spent so long trying to suppress. Because the shocking truth about the crime that destroyed her family nearly thirty years ago won't stay buried forever…

It is no secret to most who know me that Karen Slaughter is one of my favorite authors.  She recently has written some fairly dark stories that have blown her older series out of the water.

The Good Daughter is not your normal procedural suspense.  It touches on very dark subject matter, including child rape and a school shooting.  As hard as that may be to read for some people, it made this story more realistic.  There isn't a subject (so far) too taboo for Ms. Slaughter to tackle in a tactful and real world way.

I loved the flawed characters in this book.  A lot of times in this genre, the main characters are less than relatable and often two-dimensional. Because this book takes place in the past and the present, the characters' personalities can be vastly different from one page to the next, depending on where you're at in the story.  But that isn't a negative aspect for me, because they're written in a way that shows their growth as people based on the events from the past, and you get to see why they are the way they are.  It really helps you to understand them on a deeper level, and even empathize with a character that would normally be off-putting.

I think what I liked best about this specific novel by Slaughter is how we get a glimpse into particular characters in both the present and the past, letting us see how memories can be deceiving and that not everyone remembers the same event in the same way.  What's better is that didn't make it harder to follow, but even more interesting.  I caught myself questioning which version of events was true, only to learn that everyone's version is true, at least to them.  We are also reminded that not everything is as it seems, even when we see it with out own eyes.

With plenty of twists and turns, The Good Daughter was an unputdownable page turner that will keep you guessing until the very end.