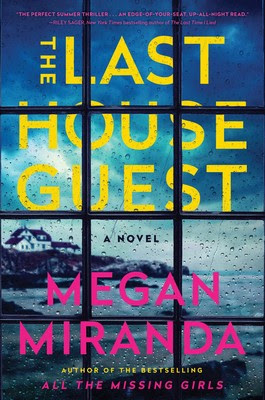 Littleport, Maine is like two separate towns: a vacation paradise for wealthy holidaymakers and a simple harbour community for the residents who serve them. Friendships between locals and visitors are unheard of - but that's just what happened with Avery Greer and Sadie Loman.

Each summer for a decade the girls are inseparable - until Sadie is found dead. When the police rule the death a suicide, Avery can't help but feel there are those in the community, including a local detective and Sadie's brother Parker, who blame her. Someone knows more than they're saying, and Avery is intent on clearing her name before the facts get twisted against her.

The Last House Guest was a good story, that started out great, but started to fizzle out for me about half way through.  I caught myself just skimming over some unnecessary inner monologues, and there was quite a bit of telling versus showing.  However, I did still really enjoy the story and read it in one sitting.

The characters weren't very redeemable.  I know, that's generally a turn off, but this really worked well for the story.  It made it so the reader keeps second guessing different scenarios and perspectives, and helped to keep the mystery through to the big reveal.  But seriously, these adults are the most immature group of people.  Other than one person (Luce), none of them are even the least bit self-aware, or attempt to work through their issues in therapy.  It is a hot mess and the drama surrounding it made for interesting quirks and hope that there would be some sort of growth with them.

The killer is not who you think it is.  I know I have said this a few times, but I can generally call it in the first quarter of the book.  So, any time I am surprised by the outcome I get excited.  I also wanted to kick myself because I should have seen it coming, but Miranda made it so easy to just skim right over the idea and move onto the next.

Miranda did a phenomenal job of world building in this novel.  As shady as the people are, I still want to go to Littleport.  Honestly, the people are part of the charm.  It reminded me of Castle Rock or Haven from Stephen King novels.

All in all, The Last House Guest is a fun suspense with plenty of twists to keep the reader involved and turning the pages.

*Thanks to Simon & Schuster for sending me an advance copy to review before publication.