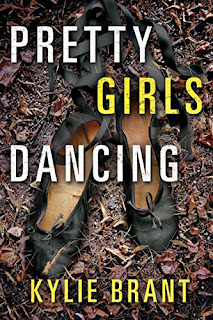 Years ago, in the town of Saxon Falls, young Kelsey Willard disappeared and was presumed dead. The tragedy left her family with a fractured life—a mother out to numb the pain, a father losing a battle with his own private demons, and a sister desperate for closure. But now another teenage girl has gone missing. It’s ripping open old wounds for the Willards, dragging them back into a painful past, and leaving them unprepared for where it will take them next.

Bureau of Criminal Investigation agent Mark Foster has stumbled on uncanny parallels in the lives of the two missing girls that could unlock clues to a serial killer’s identity. That means breaking down the walls of the Willards’ long-guarded secrets and getting to a truth that is darker than he bargained for. Now, to rescue one missing girl, he must first solve the riddles that disappeared with another: Kelsey Willard herself. Dead or alive, she is his last hope.

Pretty Girls Dancing is not so much a thriller as it is psychological and slightly suspenseful.  The story is told from five different points of view, reminiscent of The Sound and the Fury by Faulkner.

As opposed to speed reading this novel to find out who the supposed killer was, I took my time.  Brant gave us an inside look at how everyone connected to the victims were affected by their tragedies, and that is what made this book unputdownable.  We learn how the individual family members were before and after the girls' disappearances, and how wrapped up in the lives of the families the people who try to solve these cases get.  They were all very interesting perspectives, and some quite heartbreaking.

All that said, the best aspect of this story is how well Brant kept the identity of the kidnapper under wraps.  There were times when I was sure I knew who it was, and I was completely blown away once it was revealed and I was way off base.

This book made me a forever fan of Kylie Brant, and I plan to make my way through her entire backlist.