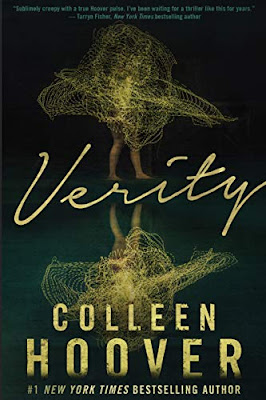 Lowen Ashleigh is a struggling writer on the brink of financial ruin when she accepts the job offer of a lifetime. Jeremy Crawford, husband of bestselling author Verity Crawford, has hired Lowen to complete the remaining books in a successful series his injured wife is unable to finish.

Lowen arrives at the Crawford home, ready to sort through years of Verity's notes and outlines, hoping to find enough material to get her started. What Lowen doesn't expect to uncover in the chaotic office is an unfinished autobiography Verity never intended for anyone to read. Page after page of bone-chilling admissions, including Verity's recollection of what really happened the day her daughter died.

Lowen decides to keep the manuscript hidden from Jeremy, knowing its contents would devastate the already grieving father. But as Lowen's feelings for Jeremy begin to intensify, she recognizes all the ways she could benefit if he were to read his wife's words. After all, no matter how devoted Jeremy is to his injured wife, a truth this horrifying would make it impossible for him to continue to love her.

I really wish I would have started reading this the day after I bought it, but I was stupid and started it at 8pm.  On a school night.  And stayed up until 3am.  I had to get the kids up at 6am.  I did not take a nap after I dropped them off at school, I finished reading the damn book!

Now, I already had a love/hate relationship with CoHo because of her whole Devil's Advocacy, and I went into this story without reading the synopsis expecting the same sort of story.  I didn't read any reviews, and picked this up months after it had actually released.  I don't know how I managed to avoid literally ANY spoiler, but I did. <--- at="" bed="" clock="" ended="" going="" how="" i="" in="" is="" morning.="" o="" p="" stupid="" the="" this="" to="" up="">
This is NOT a normal CoHo book.  In fact, this is probably the best writing we've seen from her.  Most of her books have a suspenseful element to them, but on different levels.  This one went off the damn chart.  This book makes you think you're crazy for agreeing with the main character.  It makes you question your damn sanity AND look over your shoulder.

I'm not going to say anything else about Verity, because I think the absolute best way to read it is as I did:  Completely blind.  Go. Read. This. Book.