Review: I Can Be A Better You (previously Bad Mommy) by Tarryn Fisher 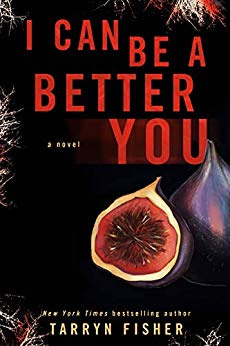 The Psychopath, The Sociopath, and The Writer. These are our main characters, told in their first person POV, and they're all pretty damaged.  Some more than others.  But because of this unique style, this is almost like a three-for-one book. More on that shortly.  There are spoilers, sorry.  I'm having a hard time writing a coherent review without laying some of them out there.

Full disclosure:  I read this book back when it was still Bad Mommy.  I'm just really behind on posting all my reviews (that mom life, amiright?).

Let's talk about Fig, the psychopath.  Did you know she actually is married and has a living, breathing husband?  You don't learn that until later in the book.  She just really dgaf about him, so he doesn't take up any space in her head.  Reading her part of the story made the reader believe he wasn't around anymore.

Next is the sociopath, Darius.  Darius is married to Jolene (the writer, more on her in a minute) and he was treating Fig in therapy.  Oh yeah, Fig is in therapy because she is batshit crazy (not getting down on people in therapy - I go to therapy).  Anyway, Darius is a sex addict, unbeknownst to his wife, and is having an affair with Fig.  But while actively sleeping with his wife's frenemy, he is constantly trying to get Jolene to stop being friends with her because of her batshit craziness.  He points out her obsession, and Jolene chooses to ignore it.

It is hard to describe the level of obsession Fig has for Jolene.  She literally tries to live her life - copies her social media posts, keeps track of what she does via her FitBit, sleeps with her husband, tries to steal their child...  Jolene put up with a LOT of red flags before finally getting her act together and putting a stop to it.

Tarryn Fisher has this way with words that I clearly never will.  She knows how people operate and she translates that to paper flawlessly.

This story doesn't end the way you think it will.  Some things that happen are expected, and some are not.  But, the way the story ended, there could be a part two.  Can there PLEASE be a part two?