Review: The Girl Before by J.P. Delaney 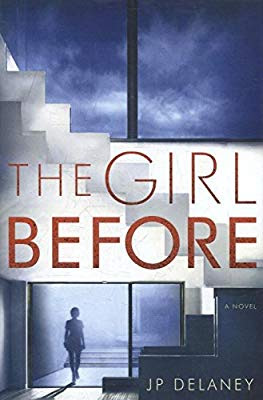 In the tradition of The Girl on the Train, The Silent Wife, and Gone Girl comes an enthralling psychological thriller that spins one woman's seemingly good fortune and another woman's mysterious fate through a kaleidoscope of duplicity, death, and deception.

Soon to be a major motion picture directed by Ron Howard.

Please make a list of every possession you consider essential to your life.

The request seems odd, even intrusive - and for the two women who answer, the consequences are devastating.

Reeling from a traumatic break-in, Emma wants a new place to live. But none of the apartments she sees are affordable or feel safe. Until One Folgate Street. The house is an architectural masterpiece: a minimalist design of pale stone, plate glass, and soaring ceilings. But there are rules. The enigmatic architect who designed the house retains full control: no books, no throw pillows, no photos or clutter or personal effects of any kind. The space is intended to transform its occupant - and it does.

After a personal tragedy, Jane needs a fresh start. When she finds One Folgate Street, she is instantly drawn to the space - and to its aloof but seductive creator. Moving in, Jane soon learns about the untimely death of the home's previous tenant, a woman similar to Jane in age and appearance. As Jane tries to untangle truth from lies, she unwittingly follows the same patterns, makes the same choices, crosses paths with the same people, and experiences the same terror as the girl before.

I really liked the concept of this book.  People lease a rental property that is fully furnished, with a lengthy set of rules that have to be followed or they get evicted.

First, I didn't guess who the Big Bad was in this suspense novel, but I knew it was not who the author wanted us to believe it was.  Delaney made it far too obvious that's what she wanted.

There were very slow points in the story where I either put the book down or had to force myself to read.  I caught myself skimming through multiple parts of the story to get to something ACTUALLY happening.

Overall, it was a decent and unique story, but I feel there was too much fluff.