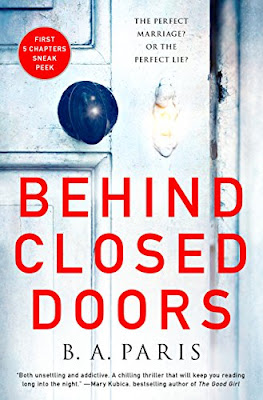 Everyone knows a couple like Jack and Grace. He has looks and wealth; she has charm and elegance. He’s a dedicated attorney who has never lost a case; she is a flawless homemaker, a masterful gardener and cook, and dotes on her disabled younger sister. Though they are still newlyweds, they seem to have it all. You might not want to like them, but you do. You’re hopelessly charmed by the ease and comfort of their home, by the graciousness of the dinner parties they throw. You’d like to get to know Grace better.

But it’s difficult, because you realize Jack and Grace are inseparable.

Some might call this true love. Others might wonder why Grace never answers the phone. Or why she can never meet for coffee, even though she doesn’t work. How she can cook such elaborate meals but remain so slim. Or why she never seems to take anything with her when she leaves the house, not even a pen. Or why there are such high-security metal shutters on all the downstairs windows.

Some might wonder what’s really going on once the dinner party is over, and the front door has closed.

From bestselling author B. A. Paris comes the gripping thriller and international phenomenon Behind Closed Doors.

I once reviewed a book that graphically described torture.  It was disturbing and grotesque, but still a great book.  Behind Closed Doors by B.A. Paris was more unnerving than that.

People like to assume that torture and abuse is mostly physical and a little psychological, but woman (and men) who have been in emotionally abuse relationships know that it's the unseen punches that cut the deepest.

Paris wrote the perfect psychological thriller for single mothers because she hones in on our deepest fear: not being able to protect our children.  This book gave me nightmares.  Honestly, I recommend this book to anyone who will listen, but I have a few friends who I've told to stay as far away from it as possible.

As the reader, you know everything going on.  This isn't a procedural crime drama or whodunit, and only partially a whydunit (meaning the story is focused on the motivations of the Big Bad as opposed figuring out the identity of the Big Bad), and I think that is why this is such a phenomenal novel.

The reason serial killer documentaries are so popular is because people in general are so enthralled with the inner workings of their minds; we want to understand their thought processes and what makes them tick, and we get that here.

Behind Close Doors is disturbingly addictive, and probably the darkest book I've ever read.  I don't know that anything will ever come close to the visceral reaction this story caused for days after I finished reading it.