Good Together by CJ Carmichael Mattie, the eldest of Marietta’s Carrigan girls, married rodeo cowboy, Wes Bishop, right out of high school and raised twin daughters. A happy life, she thought, but now that she’s in her late thirties and their daughters have left for college, her husband has become strangely distant.

Then one night Wes comes home late from a rodeo—with a stranger’s key in his pocket. He won’t talk, but she knows something is wrong.

When her worst fears are confirmed, the hits keep coming. It seems her husband is determined to destroy everything she loves in this world. Thankfully she still has her sisters, and her home on The Circle C Ranch. But more and more she thinks, not of her roots in Marietta, but of her kind, dependable neighbour, Nat Diamond. Over the years Nat has been a constant in her life, but only as a friend. Is it possible the two of them could become more? But if Nat really does have romantic feelings for her—as she suspects—why does he keep pulling away?

Is there something he needs to tell her?

He grabbed onto his mug with both of his tough, sun-darkened hands and gazed down into it, his posture sagging with a sort of sadness Mattie had never seen in him before.

He did raise his head then, but only briefly. Getting up from the stool, he went to the far window. The house had been designed open concept with a seamless transition between kitchen and family area. A river-rock fireplace with a heavy walnut mantel grounded the south end of the room. Large paneled windows to the west and north looked out to the pastures and Flathead Lake in the distance.

Mattie set down her mug next to her husband’s and went to stand beside him. She’d lived with this view for nineteen years, but never took it for granted. From here you could see almost all of their land. And it was beautiful.

Wes shifted, putting an extra foot between them. “Mattie—I’ve been thinking it’s time to sell.”

“What?” This was something they’d never discussed. She wouldn’t even have considered it an option. “But—this land is...” She couldn’t find the words to go on. She’d been raised to consider land the most important and valuable thing in the world. Her father’s ties to the Circle C were blood and marrow deep. And, being married to Wes, she’d come to feel the same way about Bishop Stables too.

“I’m getting too old to rodeo, but I’m not interested in breeding and training Tennessee Walkers. That was Mom and Dad’s thing. Not mine.”

She wasn’t surprised that he was making this admission. She’d suspected as much for years. “But—what about the girls?” This land was their heritage, their birthright. But then an ugly suspicion rose up in her. Unlike her father who had made no secret of his disappointment in fathering four daughters, Wes had never seemed to care that they had no sons. After the twins were born he’d agreed with her that their family was complete. “Would you be saying this if we had a son?”

She was relieved to hear that. But only for a second. She was beginning to see that he’d been thinking about this a long time, and by the firm set of his jaw, he’d already made up his mind.

Without any discussion with her.

This was not how their marriage worked. At least, up until now it wasn’t.

“But, how will we earn our living? We have four years of college to pay for.”

“Even if the girls could fund college on their own—what about us? How will we support ourselves, not to mention save for our retirement? It’s not like we have a big nest egg set aside.” Making payments to registered plans had never seemed important. After all, they weren’t yet forty.

“The proceeds from the ranch will be enough to take care of the girls.” Wes hesitated. “And you.”

Mattie stared at him. Finally he was looking at her, too, and his eyes didn’t look like Wes’s anymore. They were cold and distant as a stranger’s.

Understanding hit her like a bullet. She gasped, felt a physical pain explode in her gut. This must be what it’s like to die. You’re living your life—and suddenly you aren’t.

When he didn’t say anything, she was forced to put words to the awful thing.

“You want to sell the ranch. A-and you want to leave me.”

He moved restlessly from the window, to the sofa, where he straightened a cushion before shifting to the fireplace. Resting one hand on the walnut mantel, he turned back to look at her. “Yeah.”

Mattie clasped her arms around her torso, feeling a wintery chill, and also, a sense that this simply couldn’t be happening.

CJ Carmichael has published over 35 novels and has twice been nominated for a RITA award. She likes to write stories about romance, family and intrigue, usually in small town or rural settings. When it’s time to take a break from the computer, she heads to the Rocky Mountains near her home in Calgary where she lives with her partner Michael and their cat, Penny. If you’d like to learn more about her books, check out her website: http://cjcarmichael.com.

Purchase Good Together on Amazon!

CJ Carmichael and her publisher will be awarding a print copy of Good Together as well as cool author swag to one randomly drawn commenter during the tour (US only).  Follow the tour by clicking on the link below - the more you comment the better your chances of winning! 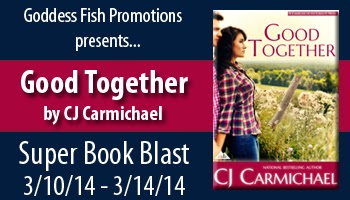