Five Corners: The Marked Ones By Cathi Shaw 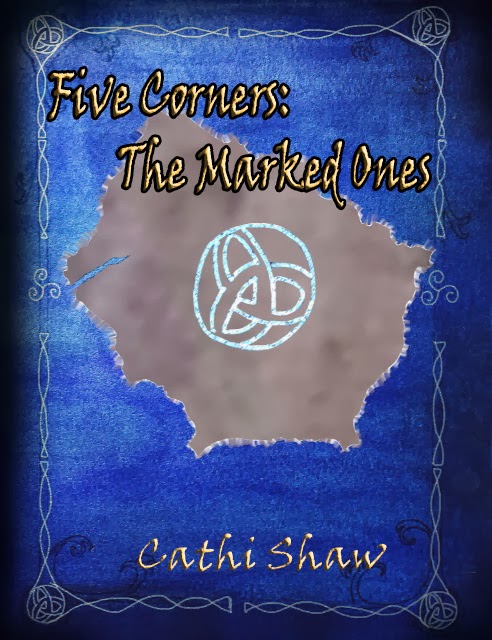 Growing up in a sleepy village untouched by distant wars and political conflicts, it was easy for Thia, Mina and Kiara to forget such horrors existed in the Five Corners. That is until the dead child is found; a child that bears the same strange birthmark that all three sisters possess. A Mark their mother had always told them was unique to the girls.

Kiara’s suspicions grow as their Inn is soon overrun with outsiders from all walks of life. Strangers, soldiers and Elders who all seem to know more about what is happening than the girls do.

After Mina barely survives an attack in the forest, the sisters are faced with a shattering secret their mother has kept from them for years. As danger closes in around them, the sisters are forced from their home and must put their trust in the hands of strangers.  With more questions than answers, Kiara finds herself separated from everyone she loves and reliant on an Outlander who has spent too much time in army. She doesn’t trust Caedmon but she needs him if she has any hope of being reunited with her sisters and learning what the Mark might mean.

This was a fun read.  Something a bit different and not done over and over.  So, for the uniqueness aspect I thoroughly enjoyed it.  There were a few aspects of the story that could be improved upon, but nothing that is too distracting from the story itself.

Some of the names tripped me up a bit, but that is kind of par for the course when it comes to a fantasy-esque story.  All in all it kept me wanting, though not quite as much as I would have liked.  I do still want to read the next story in the series to find out what exactly happens and what else has been kept from the sisters.  Nice job to the author for her creative and unique story!

Beckstar Reviews:  First book you remember making an indelible impression on you.
Cathi Shaw:  The Witch of Blackbird Pond by Elizabeth George Speare

BR:  If you could only eat one food the rest of your life, what would it be?
CS:  Chickpeas – they are versatile and I could do a million things with them. But this actually sounds like torture to only be able to eat ONE kind of food.

BR:  If you were a shifter, what animal would you like to be?
CS:  Wolf

BR:  Favorite season? Why?
CS: Winter because snow and holidays. No, wait: Summer because no school and beaches. No, wait. Spring because everything is so fresh and romance is in the air. No, wait: Fall because I love the crisp air and crunch of leaves.

BR:  Best movie ever made?
CS:  Lord of the Rings Trilogy by Peter Jackson

Kiara stared at the small body laid out in the family's tiny kitchen. She didn't know the child but that didn't stop her heart from jerking in her chest as she looked at the perfect little girl lying in the wooden box. She was dressed in what were obviously her best clothes; her dark hair had been carefully combed and braided. She was only six years old.

Kiara felt her own mother watching her closely. She forced her gaze away from the small lifeless form. Brijit murmured softly to the parents and then moved to Kiara's side.

"Come away from here, Kiara," her mother said firmly.

But Kiara couldn't stop herself from looking back at the child, noting how someone had twined a pretty scarf around her neck, concealing the ugly slashes that she knew were hidden beneath the colorful material. The result of a blade taken to vulnerable flesh. This poor girl had had no chance against her assailant.

Brijit tugged on her arm insistently. "There is nothing more for us to do here," she whispered in a hushed undertone. "Let’s go and give the family some peace."

Kiara felt a sudden wave of shame wash over her. She suddenly wondered what she was doing here?

Don’t try to deny it, she told herself vehemently, you know why you’re here.

She had seen the Mark on the child's shoulder. She resisted the urge to rub her own shoulder where an identical Mark was hidden beneath her tunic. It was something she’d believed she only shared with her sisters. But this child proved different.

And there was no question that this child had been assassinated.

Cathi Shaw lives in Summerland, BC with her husband and three children.  She is often found wandering around her home, muttering in a seemingly incoherent manner, particularly when her characters have embarked on new adventure. In addition to writing fiction, she teaches rhetoric and professional writing in the Department of Communications at Okanagan College and is the co-author of the textbook Writing Today. 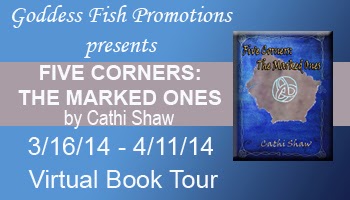 Purchase Five Corners: The Marked Ones on Ink-Smith, Amazon, and Barnes & Noble!