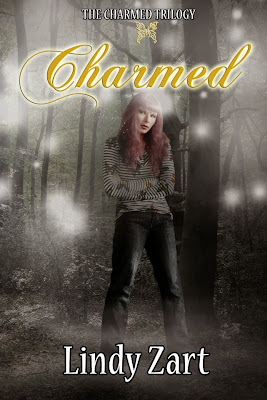 On the day Taryn turns eighteen her life changes. A black-eyed man with a chilly aura accosts her and she's abducted by a man who really isn't a man, but a Manang; half-man, half-angel.

She's told she's someone special; a Charmed, and the key to winning in a battle of worlds about to collide. Only problem is, she can be a weapon of good or a weapon of bad, depending on who gets to her first.

There were so many things about this story that I just loved. First, I love the creative names that Lindy came up with for her characters, and how they really seemed to fit so well with their personalities.  Taryn had my giggling at her witty retorts to Creed.  They had such chemistry.  Together they were just the right mix of sarcasm and irony.

I really liked the idea of half-angel, half-human beings living on another planet.  Lindy did a great job building her worlds and the characters.  She did an even better job creating the personalities with the Charmed/humans, and how they contrasted to the Manangs (the angel-humans).

The action started almost from the first page, which I loved. I really hate when I have to go through chapter upon chapter of character and world building, and that is one of my favorite things about this story (and series, actually); you learn about the many different characters as you go, making it easier to keep remember who each character is, and what part they play in the grand scheme of things.  What was even better was the ending.  It doesn't go exactly how the reader may necessarily want it to go, but in a good way.  Trust me, it all works out in the end... meaning book two, Charmed Again!  I don't know why, but I really like when a book does not go as planned, or at least as I thought it was planned.  I love it when authors step outside the box and do not just go with what they think the readers want.  That is the beauty of their art - it is their's to do with as they wish! 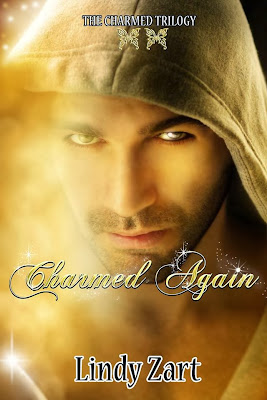 Once a Manang: a half-man, half-angel, now a full angel, Creed has darkness in him that threatens to take him over. If it succeeds, he will be forever lost.

One woman has the power to take away the darkness, but she is held captive by an evil Creed alone can save her from. He only has to save himself first.

I have to say that I actually loved this book more than the first.  Being able to be inside Creed's head was probably the smartest move Lindy could have made with this series (the series isn't over yet, though!).  I know that most women prefer to read books in a female perspective, and while I can wholeheartedly say that I would have definitely enjoyed being inside Remy's head, nothing could have compared to the full understanding you get of Creed's inner turmoil - self-loathing? There is so much to him and I swear she could have written a book double the length of Charmed Again and I would have had no issues reading it in its entirety.

The best way to describe Creed's journey is beautiful.  Absolutely beautiful.  Even when he was in his darkest moments Lindy was able to capture something beautiful.  I am probably more excited to read what is coming up next with this series than I was with Cassie Clare's Clockwork Princess (seriously!! No joke!).

Psst... Wanna know a super secret Nerd Girl exclusive?  I spoke to the fabulous Ms. Zart before writing my review because I just had to know who the next book is going to follow.  However, she is a tight lipped little stinker and wouldn't tell me.  I did, though, get a smidgen of information about it, and have it on good authority that the next story is going to follow someone we have already met in the series.  Who do you think will be the star in the next Charmed novel?  Let the debating begin!

I've been writing since I was a wee lass. I was reading before that; possibly while still in the womb. Don't think about that too much.

I started out with short horror stories and poetry. I was terrible at it. The poems not so much, but the stories were awful.

I decided to finish a book (and I DO mean finish--I'd started plenty throughout the years) when I was in my mid-twenties (so not that long ago because I'm young and will forever stay that way). Again, not my best work.

But that's the thing about writing; it improves with time. (It's also a good thing to know your work can't possibly be any worse than it was when you first started.)

What I love most about writing is having people tell me how much they enjoy my work; how my writing touches them; makes them feel intensely.

Bringing a reader to laughter or tears is a wonderful feeling for a writer, and no, I'm not sadistic. *insert evil laugh HERE* It means I got them to feel, to respond to something I created.

Also, I just like to make stuff up and put it down on paper. I have an endless supply of stories in my head; lots of stuff to share with the world.