on November 29, 2013
C.M. Stunich is having a SECRET sale for Black Friday!  Today only you can get a copy of Broken Pasts for FREE! 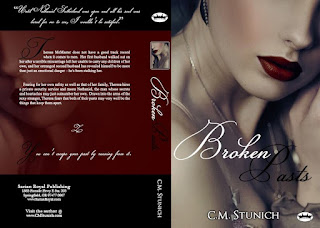 
BROKEN PASTS - an Adult Contemporary Romance (a Full Length Stand Alone Novel - No Cliff Hanger)
Mature - Ages 18 and Up.
From the Amazon Bestselling Author of 'Losing Me, Finding You' and 'Real Ugly'


“Until Nathaniel Sutherland was open and all his soul was bared for me to see, I wouldn't be satisfied.”

Theresa McMaster does not have a good track record when it comes to men. Her first husband walked out on her after a terrible miscarriage left her unable to carry any children of her own, and her estranged second husband has revealed himself to be more than just an emotional danger – he's been stalking her.

Fearing for her own safety as well as that of her family, Theresa hires a private security service and meets Nathaniel, the man whose secrets and heartaches may just outnumber her own. Drawn into the arms of the sexy stranger, Theresa fears that both of their pasts may very well be the things that keep them apart.

“You can't escape your past by running from it.”


“It's a pleasure to meet you,” he said and I wasn't sure if I were hallucinating or not, but I'm almost certain he emphasized the word. Pleasure. “My name is Nathaniel Sutherland and I'm from Personal Private Security Detail.” Here he paused and removed his glasses. He didn't tear them off his face and shake his head of deliciously soft, dark hair like they do in the movies. He just removed them gently, folded the arms up and stuck them in the front pocket of his suit. His eyes made my breath catch in my throat and sent my body temperature skyrocketing. They were dark green, smooth and polished like emeralds, deep, thoughtful. Sexy. “Is that Emily on the phone?”

“Uh.” I was at a loss for words. Without another word, he reached out, plucked the phone from my fingers and put it to his ear.

“Everything is fine here, Emily,” he said with the most wicked smile I had ever seen on a man. “I'll call you later and update you with Ms. McMaster's new phone number.” He ended the call and passed the phone back to me. “May I come in?” I stepped aside without a word and he came inside, eyes scanning the room like a predator searching for prey. His muscles were tensed and even with the clean, sharp lines of his suit covering him, I could see that he was ready for action. I closed the door behind him and locked it. He glanced over one of his broad shoulders and flashed me an admirable smile. “Good,” he said as he turned his attention back to my house. “We don't have to start at ground zero with you. That's excellent.”

“Huh?” That's all I could think to say. Jamie had said the men she'd hired were tight. But … wow. Nathaniel wasn't just tight; he was deadly. He was clean shaven with pale, not pasty, just pale, skin and full lips. His dark hair was just this side of brown, toeing that line between black and chocolate. Nothing about his appearance was out of the ordinary per se, but all together, the perfection that was Nathaniel Sutherland was hard to ignore. It was the little details that made this man: the well pressed suit, perfectly tailored to his body, the crispness of the shirt beneath, the way his hair fell just slightly onto his brow, like it had been sculpted there. He was so well put together that had he had the face of a Neanderthal, he would've looked good. And that's not to say he did. Nathaniel Sutherland had a strong face, but it was in no way reminiscent of a caveman. He straddled that metrosexual line, but in a good way. He was clean, he smelt good, and he was probably gay. Had to be. Had had had to. Or else he was married. Or both.