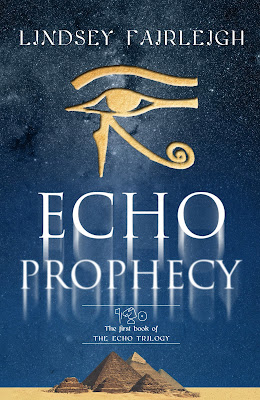 Alexandra Larson isn’t human…but she doesn’t know that. As far as Lex is concerned, she’s simply an ambitious and independent archaeology grad student with a knack for deciphering ancient languages, especially the various forms of Egyptian. When she’s recruited to work on her dream excavation, her translating skills uncover the secret entrance to an underground Egyptian temple concealed within Djeser-Djeseru—the famous mortuary temple of Queen Hatchepsut. Lex is beyond thrilled by her discovery…as is the enigmatic and alluring excavation director, Marcus Bahur.

As the relationship between Lex and Marcus heats up, a series of shocking revelations leave the young archaeologist reeling. Once Lex discovers the truth of her ancient Egyptian roots—the truth of her more-than-human nature—the people she trusts most make one final, terrifying revelation: Lex is the central figure of a four-thousand-year-old prophecy. She is the only thing standing between the power to alter the very fabric of time and an evil megalomaniac…who also happens to be her father. As events set in motion over four millennia ago lead Lex and Marcus from Seattle to the heart of Egypt, the fate of mankind depends on one thing: the strength of Lex’s love.

I wasn't sure how well I would be able to get into the book when I  started reading the prologue.  If I have a hard time pronouncing words in a book it draws my focus away from the story and I spend more time trying to figure out if I'm saying/thinking the word right.  However, by the end of the prologue I was already hooked.

I loved the characters in this book.  They were fun and very easy to connect to.  Their personalities were not overdone, which I have come to find happens a lot with quirky characters.  I loved that it took me a few days to read this book, too.  I enjoy a quick read, but I like being able to sit with a book for a few days and really become immersed into another world.  I have to say that I have also, thanks to Ms. Fairleigh, been looking for programs on History and Discovery about ancient Egypt (lol).

This story has a very original idea, which is hard to come by lately in the indie world.  It isn't so much because people are stealing ideas from each other, it is just that there are so many new authors trying to make it that many of them end up writing books with the same ideas and plots. And a random thought to add, I found the best parenting advice, ever, while reading this book (see excerpt below this review).

While I cannot wait to read the next book in this trilogy, I have to say that I loved that there was only a teeny, tiny cliff hanger at the end, and I still had plenty of closure.  I am so excited to see where we get to go next!

Swaying, she led me through a curtain of multi-hued glass beads and into a cramped back room that had clearly been decorated with fortune-telling in mind; there was a small, square table of polished oak, several dim antique lamps, and a short bookshelf filled with tarot cards, leather-bound books, and other tools of the trade. A teenage version of the shop owner was sitting at the table, rapt attention on her phone. She cocked her head inquisitively at our arrival but didn’t look up.

“Kat, go watch the counter. I have some business with this customer.”

The teenager—Kat—rolled her eyes before standing and exiting the room with a huff.

“Your daughter?” I asked, amused.

“Do you have children?”

I shook my head, surprised by her question.

“I’d advise that you spend some time remembering your teenage self before reproducing. If you can’t stand the idea of being around that version of yourself for more than a few hours, you’re not ready,” the shopkeeper replied.

“I heard that, Mom!” Kat called from the front of the store.

My hostess pointedly raised one artful eyebrow. “Please, have a seat.” She took her daughter’s place while I sat in the wooden chair opposite her.

“Thanks for agreeing to speak with me,” I said after a long silent moment. It wasn’t much of a conversation starter, but it was the best I could come up with under pressure.

With a knowing smile, she said, “I’m sure it will be enlightening for us both. Now, what brought you here?”

I pursed my lips, considering the best way to start. “I guess you could say I’m looking for answers . . . or an explanation. You see, I’ve been experiencing something sort of . . . odd.”

“Odd how?” she asked, resting her clasped hands on the table.

“Well . . . it’s these dreams I’ve been having. Except, I just had one and I was awake, which doesn’t really make sense, does it? And they’re not dreams exactly, but more like visions. I mean, some are things I’ve witnessed in my life, but some happened before I was born, and—this is going to sound totally nuts—some haven’t even happened yet. But they’re all real.”

As I spoke, my companion sat up straighter, evidently intrigued. “What makes you think it’s anything beyond an active imagination? What makes it ‘real’?”

I leaned forward, intent on making the woman—a stranger—believe me. If she believed me without thinking I was crazy, maybe I could too. “Because I know things.” I said. “Things I shouldn’t know . . . things I couldn’t know. I dreamed something bad would happen to me, and it happened exactly as I saw it.”

“If you knew it would happen, why didn’t you try to change it?”

I laughed bitterly. “I thought I was just anxious. It didn’t seem possible that I could see the future in my dreams.”

“You said it’s not always a dream, that you’ve been awake for these ‘visions’?”

She leaned back in her chair, studying me, her generous lips pressed together in a flat line. After a protracted silence, she asked, “You want to know what’s happening to you, correct?”

“I’ve heard of people with abilities like this. Usually it’s genetic.” She paused. “Have you spoken with your parents about it?”

“Mom!” Kat called from the front of the shop.

“Just a minute!” the woman across the table from me yelled back. To me, she said, “Your situation is odd, like you said, but there are others like you out there. It’s standard for your kind to learn about such things from their families. I’m amazed you’ve slipped through the cracks for so long.”

“My kind? What are you talking about?” My hands gripped the edge of the table so firmly that my nail beds were turning white.

The muffled sound of Kat’s voice, along with a deeper, male voice, grew louder from beyond the beaded curtain.

Lindsey Fairleigh lives her life with one foot in a book--as long as that book transports her to a magical world or bends the rules of science. Her novels, from post-apocalyptic to time travel and historical fantasy, always offer up a hearty dose of unreality, along with plenty of adventure and romance. When she's not working on her next novel, Lindsey spends her time reading and trying out new recipes in the kitchen. She lives in the Napa Valley with her loving husband and confused cats.

You can also purchase Echo Prophecy at Barnes & Noble, Kobo, and Smashwords! 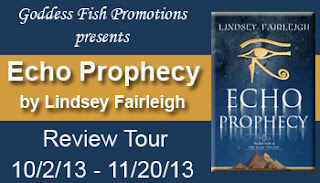