To Right a Wrong by A.C. Wilson 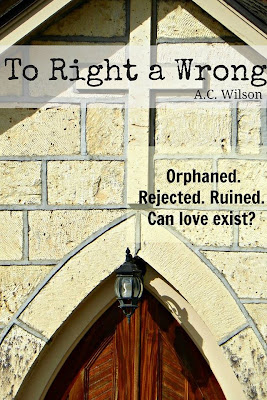 
Orphaned. Rejected. Ruined. How many wrongs can any one person take?

Miss Candace Green is orphaned along with her younger sister and sent to her paternal uncle's home. Intruding on his bachelor's status, he sends them to be "lady's companions" in Bristol.

A year in Bristol envelopes Candace in darkness and desperate to keep her sister from such a fate, they escape to find shelter with their mother's estranged family in London. Family that disowned their mother for marrying a man beneath their class, their father.

En route to London, Candace encounters many people who will change her life forever. She is stunned by their kindness, humbled by their understanding and overwhelmed by their love. As one such person, Lord Blackstone is determined to introduce Candace into polite society while securing her position in the arms of her family. All the while he must fight to hold onto her while trying to right so many wrongs. Is love enough? Can it heal such devastating wounds?

I am a huge fan of period pieces, so when this book was requested for review I snatched it right up.  I am so glad that I did!  It was the first time in a long time that I was reading an Indie book that felt as though it was mainstream.  The author's writing style was almost classic and she captured the period magnificently.

I absolutely loved Candace - she is such a strong woman and seems to be well beyond her years.  There were times that I felt her sister stole the show, though.  This is not a bad thing.  Considering what happened to them, Candace managed to shelter Catherine enough that she seemed almost oblivious to the whole situation.

What I loved most about this story was that it was believable.  It was a horrible situation the girls were forced into, but even today it is not something that does not happen.  It was nice to read a book that was not so far fetched that I could not connect with the characters or believe the story.

The only issue I had with the story was how it ended.  Once we got to the climax my heart was pounding and I swear that I actually started biting my nails, but I think that the conclusion fell a bit short.  Wilson wrote the book with such detail and amazing build up that once I reached the end I thought that there was something wrong with my copy.  I would have liked a bit more detail once the conflict was resolved (more about why it happened - what her uncle actually owed and how he ended up owing it), what happened to Fuley (did they turn him in??), and one more chapter at the end to close the story up a bit more.  That being said, there was plenty of closure.

One question for the author, though:  What ever happened to the little grey fuzz ball?! It was such a small part of the story, but having children I just loved that little bit!

I know that I will be reading any and all books from this author moving forward!

Get your copy here:

A.C. Wilson grew up as a farmer's daughter near Morrill, Nebraska, United States. She learned hard work and discipline at a very young age on their family farm that has been in their family for over a century.

She loves the Midwest. It is significantly overlooked for its soft beauty and wonderfully friendly people. After college, she moved to Kansas where she married her sweetheart and has two boys.

She loves to read. She loves to listen to many different genres of music. She finds artistic value every where she looks. Writing was always a passion which started in poetry and has now led to romance novels. It has been one adventure after another!!