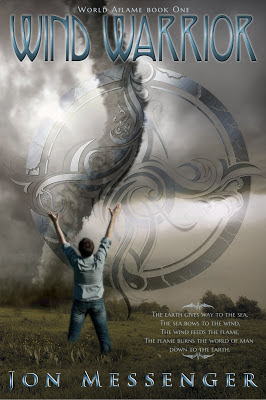 
THE EARTH GIVES WAY TO THE SEA,
THE SEA BOWS BEFORE THE WIND,
THE WIND FEEDS THE FLAME,
THE FLAME BURNS THE WORLD OF MAN DOWN TO THE EARTH.


The sleepy town of White Halls harbors a dangerous secret. On a picturesque street, two houses down from a lovely little park, in a quaint little home with a wraparound porch, lives a family that seems rather normal. Sure, their twenty-year-old son, Xander, still lives at home, but he's going to college and dating the leader of the schools top sorority. It's all very... normal.

However, when a man is miraculously saved from being hit by a bus, Xander's life turns in to the living embodiment of the tornadoes he can suddenly create with a flick of his wrist. Whether he wants this gift or not, Xander must learn to use his new 'super power' quickly if he wants to survive.  For his kind is a dying race, and when this sleepy town has a sudden influx of new, blonde, fire wielders, no one is safe, especially Xander. It doesn't help that one of these blondes happens to be the most beautiful girl he has ever seen. Xander can't deny the instant connection he feels to her so, when she tries to kill him, it certainly makes things complicated.

This is one of my favorite books that are in a male's perspective.  I usually have a hard time connecting with the main character if they are a male because, well, I'm not one; but I really could not help but like Xander.  Something else I really loved in this book was the relationship between Xander and his grandfather.  At first I saw him as this cranky old man that walked with a cane, like the old man in the movie UP.  I could not help myself. But, he's more like a mix of him and Clint Eastwood in Million Dollar Baby.  I know, my brain is weird.  Everyone should have a grandfather like that!

There is also some very amazing supporting characters in this story - Sammy, Jessica, and Sean.  Sean is by far one of my favorite supporting characters in a book.  His scenes in the story made me laugh out loud - especially one involving a fire extinguisher (if you've read the book, I know you will understand this!).  He is the typical college boy that has great ideas but forgets to think things through to the end.  He's also the big tail puller, you know the type - the one who picks on the girl he likes to try to hide his attraction to her.  That brings us to Jessica, the girl you love to hate but cannot help but root for her.  I really hope there is more of her in the series because I can see quite a bit of character growth to the point that she could be an integral part of the elemental world that Messenger has created.

Sammy is an enigma I think.  It was pretty obvious "what" she was when her character was introduced, but I could not help but like her.  She was so refreshing compared to Jessica, like a breath of fresh air (I know, I know, insert cheesy eye roll here).  She is fun, light-hearted (for the most part), and spontaneous.  It nearly broke my heart when all was revealed about her.

Then there are the pretty bad-ass Fire Caste.  I had a hard time imagining the fire caste as blondes, I really wanted them to be red-heads to match their personality, but it works well for them because of where they come from - living in the depths of the Earth and all that.  I can't even imagine how horrible the heat would treat my hair.  I know that is a silly thing to mention in a review, but it is one of the things that ran through my head as I was reading.

I am so excited to get the next installment of the World Aflame series, that I am hoping will be at least a trilogy.  I am desperate to learn more about Sammy and her part of this puzzle that Messenger has wonderfully built up in this book.  I see many amazing things happening with Xander that will probably be something completely new to any wind warriors - his abilities, I think, are something that no other wind warrior has done in the past.

Jon Messenger (Born 1979 in London, England) serves as an United States Army Captain in the Medical Service Corps. Since graduating from the University of Southern California in 2002, writing Science Fiction has remained his passion, a passion that has continued through two deployments to Iraq, a humanitarian relief mission to Haiti, and an upcoming deployment to Afghanistan. Jon wrote the "Brink of Distinction" trilogy, of which "Burden of Sisyphus" is the first book, while serving a 16-month deployment in Baghdad, Iraq.