Written in the Stars by Jennifer Martinez - Blog Tour 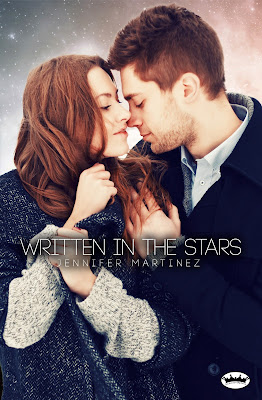 
"You've got to kiss a few frogs before you find your Prince."

Believers of fate, destiny, whatever, say that there are many paths to your one final destination. No matter what choices you make you will always end up right where you are supposed to be. Well I guess I took the road less traveled because God knows I’m broken, bruised, and damaged.
This is my story. It’s about all the wrong turns that led to the right destination. We were written in the stars from the very beginning and neither of us knew it. Love is something you can’t fight and can’t hide from no matter how bad you want to.This is my cosmic turn of love.

Once we were safely in the privacy of what I would later find out was his room, we picked right back up where we left off. Our hands explored every inch of our sticky bodies while our tongues entwined tasting every bit of each other’s mouths. The salty taste of his skin was a far cry from the sweet pungent scent of the room. His fingers slowly made their way to my rib cage leaving trails of heat like scars on my skin. His grip tightened around my chest as he effortlessly lifted me off the ground. When my legs wrapped around his hips I heard a growl escape his throat only forcing me to hold on tighter. Our lips never parted as he lowered us onto his black and blood red sheets. I snaked my hands under his shirt, exploring his stomach and slowly taking his shirt off. I had never really gotten a good look at all his tattoos and I wanted to see every inch of his body. He placed his legs on either side of my hips and sat up slowly taking his shirt off as I kissed and licked all of his exposed skin. Tattoos weren't the only thing covering his body. His stomach and sides were riddled with old scars. I made it a point to kiss each and every one as I let my mouth do the exploring. I glanced up just as his head tilted back euphorically and took the opportunity to remove my own shirt. We were opposites in every way. He was covered in a past that left its mark and tattoos that expressed all his emotions while I was a blank canvas still learning what it meant to think for myself. For the briefest second I saw the hope in Kevin's eyes and then he was pressing his entire, hard body on top of mine. His teeth found a sweet spot on my neck right as my hands found their way to his ass. Every nip made me squeeze him a little harder and I was shocked to find out that I was actually enjoying the pain.

I had enough of the teasing and decided it was time to lose our pants. I pushed him up just enough to unbutton his black jeans. His eyes lit up like a bonfire as he relinquished his position on top of me and rolled over onto his back. I trailed a path down his stomach with a mix of kisses, licks and nips. The farther down I moved the louder his moans and growls became. When my mouth finally caught up with my hands I used my teeth to slowly unzip the skinny jeans that were guarding my prize. The zipper finally stopped and my fingers wrapped around his waistband leaving little red trails where my nails scratched his porcelain skin. Every inch closer to the floor his pants got the tighter his grip on my hair became. By the time they were in their rightful place on the floor I could feel the throbbing sting on my entire scalp.
My eyes surveyed every inch of his naked body as my mouth watered for a taste of the solid, hard cock standing at attention like a flag on July fourth. I gave him one last kiss on the mouth before licking my lips and heading south to my prize. My tongue lightly grazed the head of his magnificent member, causing it to twitch before I moved onto his shaft. Once my tongue was done exploring I opened my mouth to take him all in. His heat in my mouth was intoxicating. The more I sucked the more excited I became. His moans of pleasure and constant hair pulling continued to spur me on. The harder he pulled and the louder he moaned the harder I sucked. I had one hand wrapped around the base of his cock while my mouth sucked, licked and glided across him. He finally lost control and pulled me off of him and onto my back. 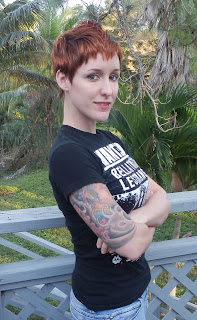 One day while slaving away at her monotonous day job, Jennifer Martinez found her true calling. Like a firefly in the night, the pages called to her. Once she caught the bug there was no stopping it. Her fingers flew furiously across the keyboard winding tales of love, mystery and anger. She snapped out of her reverie to find herself still behind the desk but at least she knew who she was… Author Jennifer Martinez.

I like to think of myself as a beautiful conundrum. When I am not writing, I can be found surrounded by my amazing family and 4 dogs or volunteering at a local animal rescue. I love who I am and don’t mind at all when I get strange looks from people. I am a tattoo covered, child and animal lover who looks forward to destroying peoples preconceived notions of what “someone like me” would be interested in. You only live life once… you may as well make it interesting.

Written in the Stars will be available for purchase on April 30, 2012 on Amazon!

♥ My review of Written in the Star within the next few days! ♥