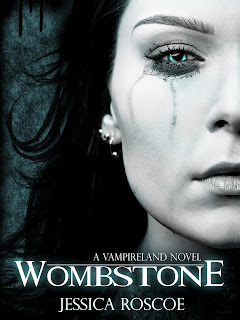 I had no idea what I was getting myself into when I joined this blog tour and agreed to do a review on the book.  I'm not even really sure how to begin.  I have to say that this may be one of my top 5 books that I've ever read.  Thankfully, when the book starts the main character, Mia, lets you know that this is no fairy tale - and it definitely is not.  This book doesn't have a happy ending, and it leaves you with quite a cliff hanger; and your jaw resting on the floor.  This isn't your typical Mature YA vampire story full of hearts and flowers and true love with a happily ever after.  This story is dark and at times made me jumpy.  This is a story about vampires the way they should be - the kinds that makes you look over your shoulder anytime you're out after dark.

The author did an amazing job making you feel what Mia feels once she is captive.  That's right, she is kidnapped and held captive.  She has no changes of clothes, she is roomed with a girl that asks daily to be killed because she just doesn't want to do it anymore.  They have a bathroom that is filthy with no faucet on the sink or tub, and are only given the faucet to put on when their kidnappers decide they want them to not stink anymore.  It is very heartbreaking reading the first half of the book.  I really don't know how to explain the emotions I felt while reading it.

I will say that she manages to escape, in a way, but I'm not going to divulge exactly how that happens.  You really just need to read the book, because the second half is what she goes through after she breaks free.  Seriously, this book is... I want to say amazing, but feel that it is wrong because of the situation in the story.  But it really is simply amazing.

Once upon a time, I was just a girl. My name was Mia. I lived a long way away from here. I had a mother and a best friend and a boyfriend I was pretty sure I had fallen completely in love with. I lived most of the time in my dorm room at my high school, because despite any other excuse, I didn’t like to be alone.

I wasn’t the first girl that was taken.

Sure, I had heard all about the girls who were missing, and even though they were only ‘missing’ I knew in my heart that those girls were dead. And my heart scrunched up in agony for them, for their families, just for a moment. Until the thought was replaced by something else, something different, because I couldn't bear to think about those poor dead girls any longer.

I felt sad for them. But more than that, I felt glad that they had been strangers – not someone I knew, and certainly not me. Things like that didn’t happen to girls like me.

They always happened to someone else, and that’s why I barely blinked as I made my way across an empty football field, through a snow–laden parking lot, to meet a fate I had arrogantly assumed was reserved for other people.

I was a stupid girl.

I paid for it.

Jessica Roscoe is the author of Wombstone, a Young Adult paranormal novel. From a young age, she delighted in the written word and would often scare her poor parents with outlandish stories filled with the supernatural and macabre.

Jessica studied film and screenwriting at university before deciding that novels were her calling. The setting for Wombstone was inspired by a six-month stint in the U.S. where she worked as a lifeguard at a summer camp in Mt Freedom, New Jersey. She is currently working on the next book in the Vampireland series. Her other loves in life include good quality tea, delicious wine, reading and hanging out with her husband and baby girl.