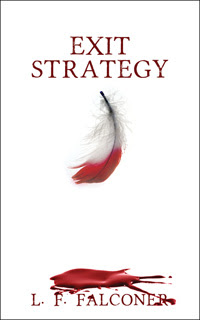 Jonas Dumar has a problem. Having little faith that his lawyer can get him acquitted of the murder charge he faces in Massachusetts, Jonas takes to the sea under an assumed identity to seek asylum with a past college chum who now lives in the Shetland Islands.

Hoping to ease the loneliness of the voyage, at a quick stop in Newfoundland, he takes on board, Gabe and Izzy, a young couple trying to work their way back to Spain. Only when he's back out on the open sea does Jonas begin to suspect his passengers are not what they appear to be. But then again, neither is Jonas Dumar. So begins a nightmarish voyage across the North Atlantic.

After a failed attempt to abandon Gabe and Izzy in Greenland, Jonas awakes one morning to find himself sailing alone with nothing but a haunting dream and a resurrected childhood friend. Gabe and Izzy have vanished without a trace. But then they come back.

Delving into the mind of a man in possession of too many secrets, Exit Strategy is a wild excursion into a realm of the fantastic, as Jonas Dumar comes to realize that some secrets are better left unknown. A man really can learn more about himself than he ever wants to know.

I wasn't sure how much I was going to like this book.  When I started reading it seemed to drag on a little bit, until I realized it was just how the main character thought. It was sort of easy to guess early on what the big plot twist was going to be, which is fine because I do that with most books.  However, there was a bit more to it in the end, which did surprise me.

The only real problem I had with the book was the paranormal aspect of it.  I just didn't see the need for it.  I mean, **SPOILER ALERT** the guy was a nut case with multiple identities, two of which he didn't even know about.  So why add that little "twist" at the end of the story.  It kind of made it a bit too much for the conclusion.  The story could have ended exactly like it did without that small aspect of it.  Very few things would have needed to be changed, if any at all.  I mean, Jonas was crazy, and could have seen any of those things thinking they were real.

One of my favorite things about this book what Jonas' thought process.  Leana really did an amazing job creating the inner workings of someone who is mentally ill.  I loved the random "if a train leaves boston..." bits, and his random commentary on his own thoughts actually had me laughing quite a few times throughout the whole book.

I did enjoy reading the book, and I did enjoy the twist at the end with the forth identity (sans the paranormal aspect).   I would recommend this book to anyone that likes a good mystery.

Like a silent nightrider in Toyota blue, the Camry floats south down the black ribbon of road, aiding and abetting the fugitive within.  I pop in an Aerosmith CD to help keep me awake.  Traffic is light and I up my speed a little.  Sam is curled up on the front seat beside me, content to sleep now after his initial thrill of going for a ride dissipated.  Sam is the only dog I’ve ever owned.  I was never allowed to have one as a boy.  My mother didn’t like them.  “They’re filthy, destructive, dangerous creatures.”  (Talk about the pot calling the kettle black.)  She did allow me to have a goldfish once, though.

He had a small black spot right below his mouth, so I’d named the goldfish Blackbeard, scourge of the high seas, and I’d watch him drift round and round and round in his little round bowl with nowhere to go.  When he’d get feeling really adventurous, he’d dart through the ceramic arch anchored into the gravel at the bottom.  I’d paid close attention to the directions given me by Mr. Nojima at the pet shop.  “Feed him only once a day, just a shake or two, or he might die from overeating.  Clean the fishbowl thoroughly once every week.” And I would carefully give him just a shake or two of food every morning, and I’d diligently bring a fresh bowl of water to room temperature once a week so I could deposit Blackbeard into it and scour the fishbowl clean.  Then I’d refill the fishbowl and allow the water to return to room temperature before Blackbeard could return to his sea kingdom.  “You don’t want to shock the fish with a sudden change in temperature.  It might kill it.”  So careful I was to provide my pet the proper care.

Three weeks after I brought him home, I woke up to find Blackbeard floating belly up in his bowl.  I poked at him, trying to nudge him to wakefulness, but the terrible truth I had to face was that Blackbeard was dead.  “I knew you’d just kill it,” my mother said before she flushed him down the toilet while I said a silent prayer for my beloved pet on his way to eternal rest in the sewers.  “He’s not getting a dog,” she told my dad the following week.  “He’s not responsible enough.  He couldn’t even take care of a lousy goldfish.”

For years I lived with the guilt of knowing I had killed my pet out of irresponsible neglect.  My mother never let me believe otherwise.  My father was too oblivious to care. 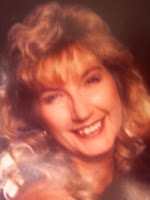 Nevada native, L.F. Falconer, has possessed a love of writing since she learned to read in first grade.  Over the past 40 years, she's been published sporadically in various Northern Nevada newspapers and college publications.  Having tramped about the western United States with her first husband, she is now remarried and lives back in the neighborhood she grew up in, employed at NAS Fallon, home of the US Navy's Topgun School, doing her small part in training fighter pilots.

Learn more about Leana at these links -
Facebook | Amazon | Goodreads