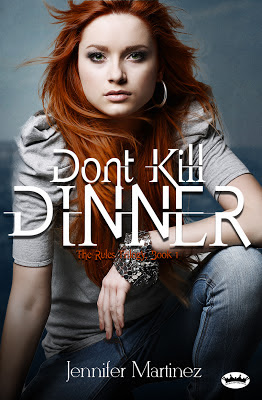 There are three rules when it comes to being a vampire in New Orleans:

Not too hard, right? Wrong. Kenna is a new vampire filled with a passion that has turned into an uncontrollable lust for blood.

Will Arthur be able to stop her feeding spree before the coven comes after her or is Kenna beyond saving?

Arthur has been watching Kenna for years, wanting her to try her own hand in life before he gave her the ultimate proposal. Now that she has accepted, will his love be enough to save her?

I have to say I am quite impressed with Jennifer Martinez right now!  Don't Kill Dinner is a nice change to the normal vampire books that are circulating lately.  First, there are no sparkles.  Not in the Edward Cullen sense anyway.  Second, they can eat!  I would probably take up someone's offer to be turned if I knew I could indulge in anything I want, taste the flavors even better than before, and not gain a pound.  Seriously, this fat could would jump on that band wagon in a heart beat.  Third, the conflict in this book isn't your run of the mill problems.  There isn't a love triangle making me want to roll my eyes every time the leading lady has to tell herself that she loves her boyfriend and ignore the feelings she has about another man.  I don't know how much more of that I can take.

It was a very easy read, plenty of action, and fast paced.  I read this book in one sitting (except for potty breaks of course) and will probably read it again before the next book comes out.

Oh, did I mention the very lickable Arthur??  That's because I'm keeping him all to myself!

Be sure you check out the Don't Kill, Dinner Party - lots of goodies to be had!