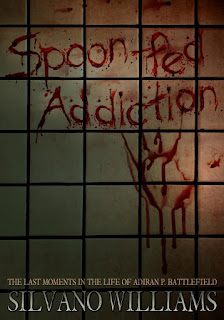 When I was asked to read this book, I wasn't sure how I would like it.  I prefer to watch stories like this in movie form - but I enjoy mystery and suspense enough that I thought I'd give it a go.  And I'm glad I did!

The only thing I didn't really like was knowing what was going to happen at the end.  For me, it made it hard to read because I felt it took away from the suspense factor, but it wasn't so much that it deterred me away from the book.  It was actually quite enjoyable if you like suspense.  Read the blurb below, and you'll see what I mean.


That being said, I was wrong.  It didn't exactly end how I thought it would.  Seriously, I thought I had it all figured out about half way through, and it went a completely different direction.  The writing was quite well, too, which was refreshing.  Silvano Williams does a spectacular job painting Adiran's tormented thought process.  It was also interesting reading about Adiran's opinions of people that he "worked" with.  Silvano can also be very insightful - see quote:

"Love is like religion. Such a complex answer for an unneeded question. Who needs gods when there is the truth? All we need to do is open our minds and accept it."

All in all, it was a nice, fast read.  If I had anything really to complain about, it would be that I would have enjoyed it being a bit longer!


"Spoon-fed Addiction is a first-person account of the last moments in the life of Adiran P. Battlefield; a sarcastic, nihilistic, yet charismatic young man who died by his own hands. A small time drug dealer by trade, Adiran gives you a front seat ride into his mind as the night's events unfold. The story begins with a diary excerpt however, of a girl proclaiming her love for Adiran--a love so strong that 2 months after his death she follows in his footsteps and commits suicide to join him in the after-world.

Adiran's night begins like any other, full of self-loathing and irreverent observations about the world around him, typical of a person that has grown in an environment of drugs and apathy. As the night goes on, Adiran’s own grasp of reality unwillingly slips from him, forcing memories of painful events to resurface. Through his own process of self-discovery, you will learn details from his childhood, and most importantly, about the person who he considered the love of his life--Veronica. The eventful night that ended her life is the primary cause for Adiran’s spiral of constant sorrow and discontent. The murder of another one of his friends is what sets in motion the chain of events that make this night his last one alive.

Spoon-fed Addiction is a psychological thriller, driven mainly by Adiran’s inner dialog as he tries to find a way to exact revenge on the person responsible for his friend’s death. Putting into question his own perception, Adiran glimpses something hidden within the shadows, a supernatural force that may be responsible for the events that ultimately lead him to his death.

Take a ride into an almost familiar world as dreams become nightmares, lives become failures and flawed perceptions of a reality tainted by things unseen give way to horrible consequences."


Get your copy of Spoon-fed Addiction in all eBook formats, and visit Silvano Williams' facebook page.