Order of the Dimensions by Irene Helenowski 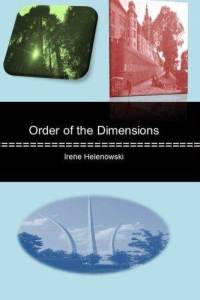 First, I want to say that I am not a super, huge sci-fi fan.  I love watching sci-fi movies, but it's harder for me to get into books of the genre.  However, for the most part, I did enjoy this book.  It was a quick read and easier to understand than I initially thought it would be.

There are quite a few physics terms (at least I'm hoping it's physics - I'm not a science person lol) that we're supposed to understand without an explanation, which at first irritated me a bit.  But, after a few of them were thrown around, it was easier to get the gist of what they meant based on the surrounding phrasing.  And to add further, there were so many "technical" terms, that if she were to explain all of them, we would have been there for hours for each one.

The story reminded me a lot of Quantum Leap.  I watched that show a lot with my mom when I was younger, so it was easy for me to follow the jumps from one dimension to another.

I would have liked a bit more character development for Jane and Randy, however I loved our multidimensional villain, Anton Zelov!  He was just the right amount of creepy.  The author also did a good job of making me feel sorry for him in a few aspects of the book, which I loved!  It's hard for an author to have me rooting for the villain, but there were a few instances where I wanted what he wanted.

There was closure in the conclusion of the book, but it went a bit fast for me.  I think she could have gone a little more in depth with what happened to the characters after the conflict was resolved.

All in all, it wasn't a bad read.   Also, Irene Helenowski is working on a sequel to this book, which I will be reading.  I think that we'll get more of a back story for Jane and Randy; and if we don't, we'll at least get to find out what happened to each of the characters in their perspective dimensions!