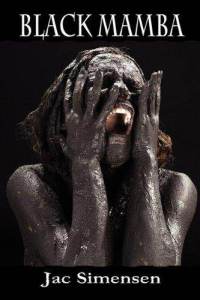 Do not let this cover scare you - though it is an amazing cover for the story.  Black Mamba, written by the very talented Jac Simensen, was amazing! It is a story about a Mamba - a Haitian Voodoo Priestess - and an evil Voodoo sorcerer; you'll have to forgive me because I don't remember the actual term for him and because the book is so amazing I am forcing some of my family members to read it - so they have my copy!

Stella is our resident Mamba.  Being a Mamba is inherited, and Stella received her gift when her mother was dying.  She is able to draw evil spirits out of people, healing them in a way; or killing them if they are too far gone because the spirits.

So when Stella was a young girl, shortly after her mother died, she was sold into slavery.  No, not that kind.  She was taken to be a sex slave.  Don't worry, he doesn't go into detail; and I will gladly let you know that she escaped before anything horrible happened to her.  She was rescued by a British couple who ended up raising her and she lived a fulfilling life; and as an adult, Stella opens up a safe house for abused women and children because of her past.

I'm going to stop there with my description of the story because I want everyone to read this book.  It is seriously fantastic and if I had a list of favorite books, which I don't because it would be entirely too long, it would belong in the top 10.  If you like Stephen King, you'll love this book.  I actually found it more enjoyable than Stephen King's novels because it doesn't have a seriously disturbing conclusion. This is an R-rated book though, so 18+ only kids!

And a side note:

When I received my copy of the book there was a letter from Jac with it.  He said, "The motivation for this novel came from a woman I recently met who is the head of a group in Atlanta who run a shelter for abused teens and children.  The thing that got to me is that she said almost no one in the traditional press would give any print space to raising the awareness of the horrors of commercial, sexual abuse in America; a problem that with our current economic distress is growing like cancer.  She explained that sexual exploitation carried with it the 'ick factor... it's too disgusting and awful, I don't want to discuss or know about it.'"

There is also information in the book about how to donate to this extremely important cause - which I cannot add to this post because, again, I don't have my copy of the book with me.  Once I get it back I will add the links!