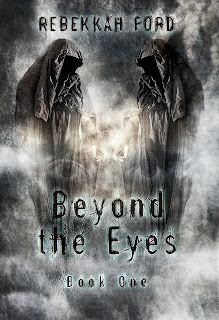 Beyond the Eyes is the first book in Rebekkah Ford's first series, and I loved it!  I have read other reviews on this book, and honestly I don't think this book deserves any lower than a 4 out of 5 stars.  I personally give it a 5 out of 5 (4 out of 5 if I factored in grammatical errors - but I like to review the story, not the editing).  The majority of the reviewers agree with me, which makes me very happy!

I love that her story is unique.  The paranormal world that she created is a first, for me at least.  I love that it isn't vampires and werewolves. It's different and hasn't been repeated over and over again.

Paige is a 17 year old girl who has cryptic premonitions that he is having a hard time understanding.  She lost her father at the young age of four.  Her mother is a traveling nurse, and isn't around much.  She keeps herself busy with school and hanging out with her friends: Carrie, Tree, and Matt.  She meets swoon-worthy Nathan very early in the book, and I find him very interesting and I ached to get to know him better ;-)

Thankfully, we get to know him quite well!  One of the highlights of this YA Paranormal Romance is the romantic relationship with Paige and Nathan.  They do progress at a bit of a faster rate than in other novels, but I don't feel that it was too fast.  He is old and knows what he wants (I'm not going to say how old because I'm not into spoilers - just know that he's old enough!), and she had to grow up at a young age due to her mom's job keeping her away from home; she also has been in a serious relationship in the past that lasted a few years.  Paige knows how a relationship works and I would even venture to say that she was able to make an educated decision in regards to Nathan.

While I missed the butterflies of experiencing the growth of their relationship, it didn't take anything away from the story for me at all.  With that in mind, I love that she wrote their relationship in a realistic way - and I got plenty of warm fuzzies from that!  I'm so sick of YA novels pretending that these couples aren't having some kind of romantic "shenanigans!"  Things are different now than they were when even I was a teenager.  And it isn't written in a way that it is inappropriate for even a 14 or 15 year old to read - don't worry moms!  They've seen worse on MTV than they'll read in this book.  It was actually refreshing.  If you want something to compare the "Hotness Factor," I would say it is more hot than Breaking Dawn, and much colder than Fifty Shades of Grey (like an ice cube compared to that series)...

Here is what confuses me about other reviews I have read about this book:

One reviewer said that she felt the main character, Paige, was too whiny and cried a lot.  There were a few times that she did cry; we, as adults, have to remember that she is a hormonal 17 year old, who suffers a great loss (fair warning - you'll need a bit of tissue)!  Her mother is very flighty.  She is a travelling nurse who is never around (which we find out later is because it hurts her to be around her daughter because she reminds her too much of her dead husband - and she tells Paige this!), so Paige has been, basically, raising herself.  And the last, most common issue among reviewers who rated less than 4 - Paige is selfish.  Again, Paige is 17 years old.  If she was selfless and wasn't hormonal, I would be giving the book a much lower rating - because it wouldn't be believable.  Considering the circumstances surrounding Paige's life, I find nothing odd about her personality.  I agree that she is all of these things, and even some more that I could add to the list, but I see nothing out of the ordinary with her behavior in comparison to any other teenage girl her age.

I, for one, am very excited to continue on Paige's journey.  I can't wait to read the second book, Dark Spirits, to see her growth.  Also, for those Grammar Nazi's: there were a few mistakes, but none that just screamed at you; more than mass market books, but much less than most self published books I've read (and there have been a lot).