The Watchers Trilogy by Karice Bolton 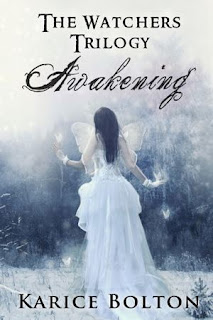 At first, I wasn't sure what I would think of this series.  I got the first book for free when I went on what I like to call a "Free Book Frenzy" on Amazon.com.  It had a pretty cover and I'm into paranormal romances.  I'm even more into a series, because stand alone books are not enough!  I want to be able to escape to another world for at least a week - I read fairly fast.

A little history lesson first:
This series is loosely based on the Nephilim.  Basically the "sons of God," or angels, came to Earth and mated with the "daughters of man" and had children.  Their offspring were referred to as Nephilim.

So, the story starts off with a young woman named Ana.  She lives in a small town and is rebuilding her life after her parents died, yet she really has no memory of her childhood.  She works in a bar and she meets this family that she feels very drawn to; and she soon learns why she has no memory of her past.

She finds out that she actually knows these people, and has for a very long time. And the cliff hanger!  Oh. Em. Gee.  You see, Ana has dreams that sometimes come true.  And when you're reading it you know something bad is going to happen, but you can't quite figure out what it is.  Then you start to figure it out and you think to yourself how absurd it is that it actually would happen - surely they can find a way to fix the problem.  Then BAM!  ????????????

I'm stopping there about the story because I don't like spoilers.  Ah, who am I kidding, I will leave you with only one!  "What had happened to me, to my life? This new existence had been more captivating than I could ever have imagined. I had loved and lost more in this short period of time. I knew it was only the beginning, if I could only survive for him. I heard the whispers from the others and retreated to what I knew was expected of me. The Awakening was to begin." 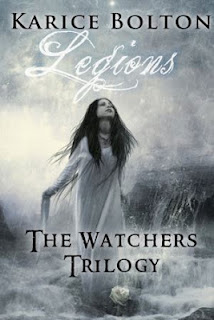 Now, onto book two - Legions.  As with most book series, the subsequent books I generally enjoy more than the first, or the one before if it wasn't the first.  That could just be me, or it could be that the author improves with each book, or both.  Whichever is the reason doesn't matter.  This one was outstanding!

The book pretty much picks up right where we left off in The Awakening. First, we get to experience what it is like to go through an Awakening, which I would compare to childbirth; purely based on the  intensity of it and that it all kind of just happens while running on autopilot... And that you "don’t remember that much of it, except for the excruciating pain."*

You get some questions answered in this book, only to end up with more by the end.  But that goes with a series and I honestly didn't care - I was ready to read the third book before I even started on the second.  I'm really into instant gratification.

Assuming you have read the first and know what I'm talking about, I'm truly annoyed by one thing.  Ana should have held out on Athen!  It is absolutely not fair that she gave it up so quickly when he made her wait what seemed like an eternity to bump uglies make love.

I'm not going to even try to push this book on you.  If you read the first, I already know you're going to read this one! 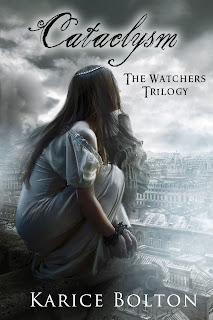 Cataclysm is the third book in The Watchers Trilogy.  As with Legions, this third installment starts of basically right where we left off - Thank God!  With "losing" another main character I don't think that my heart could take much more.  Thankfully it doesn't take long for us to figure out what happens with the lovely Arie... But I'm not going to even hint at whether or not her plan works.  Read the book! ;-)

There is a lot of action packed scenes that don't always turn out the way you want them to.  Lives will be lost.  You have been warned.  Although, you should be used to that by now... if you've been reading the books.

That is all you get for spoilers in this book.  It's the final of the series and you are not allowed to find out how it ends unless you read it!  I have to say that there is a lot that happens in the book and I couldn't be happier with the ending.

Miss Karice, you did a fantastic job!  I absolutely loved these books and I am soooo excited to start reading The Witch Avenue series!  It is actually my next books to read.  You're lucky though, I usually don't even start reading a series until all of the books are out.  I am very much an instant gratification kind of girl, and I don't like waiting! lol  I am sure they will be equally as fantastic as The Watchers has been! ♥