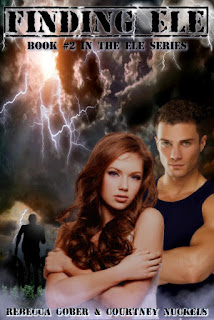 We start off right where Project ELE left off, which I love! A lot of book series do not do that, but a lot of writers aren't as awesome sauce as Courtney and Rebecca! Willow found her mother outside The Shelter and we are introduced to a lot of new people. A lot, seriously. An army basically. We also get some answers as to what is going on. Well, not really answers, but we at least know what happened to everyone that did not make it into The Shelter. It's an all around good book. Now, lets get to the boys!

This second installment to the ELE series was full of action, suspense, drama, and butterflies. Well, the kind that live in your stomach when you're young and you meet a boy that you like. Or two boys. What? Yes, two boys! First, let me start by saying that this is not your typical girl-meets-boy, girl-likes-boy, girl-meets-new-boy, girl-is-confused-naive-and-stupid-stupid-WHY?-Why-would-you-choose-THAT-guy?!?! No, it's nothing like that. When I met the characters that were introduced in this book I wasn't sure how I felt about Tony. Tony is a good guy, don't get me wrong, I just had a weird feeling about him. And as the story continued on I started to "bond" with Tony. Then I wanted to scream because I genuinely liked him! And I really liked Alec. I couldn't decide who I wanted Willow to be with. That being said, I also forgot how old Willow is (16 years) and would only be reminded because of her being a bit naive when it comes to relationships. She is such a great heroine and, for the most part, is wise beyond her years! While she can be selfish, she does put others before herself. Rebecca and Courtney write her emotional roller coasters so well, you can actually feel her love, and her joy, and her heart ache. Well done ladies!