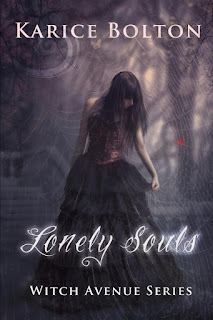 Oh. Em. Gee! I absolutely adore this series!  I personally think it is better than The Watchers Trilogy (also by Karice Bolton) - and that's saying something because I really enjoyed that series, too! Kind of a totally different genre though, so I suppose I shouldn't really compare the two.

In Lonely Souls, we have Triss, who is just on the cusp of adulthood; turning 18 in a few weeks, she will become a member of the Witch Avenue Coven.  Things take a turn for the worst (as they usually do) when her mother goes missing.  Triss doesn't believe that her mother is dead, but her soon-to-be coven pushes for a memorial, and soon she sees that things are not what they seem.  Secrets about her ancestry begin to reveal themselves, adding nothing but confusion in her already upturned world.

Unsure of who to trust, she finds solace in her life long friend - with gorgeous blue eyes and dark hair and rock hard body, and swoon... sorry about that - Logan.  She finds other things in him too, but to find out about those, you'll have to read the book! ;-)

This is a great series for all ages, though it is written for young adults.  I think because we are dealing with 17 years and up, it is easy for anyone to relate.  The plot is followed nicely and the editing wasn't bad.  With very few mistakes (no more than mass marketed books) there were no distractions while reading; except for the gorgeous Logan.  He is enough to distract anyone!

So, if you're a fan of Twilight, don't read this book; it will raise your expectations for the YA genre and completely ruin the relationship between Edward and Bella.  Seriously, though, that was such a horrible relationship and set girls up for failure in the romance department.  Don't get mad, I'm not hating on it!  I'm a fan myself.  But the relationship dynamic between Triss and Logan is a much healthier one!  This is the "knight in shining armor" that girls need to compare their love interests to.  Logan is respectable, generous, loving, and totally swoon-worthy!

Did I mention that this first installment to the Witch Avenue series is FREE??  Go download it!