Visions of Fire and Ice by Teresa Damario Blog Tour 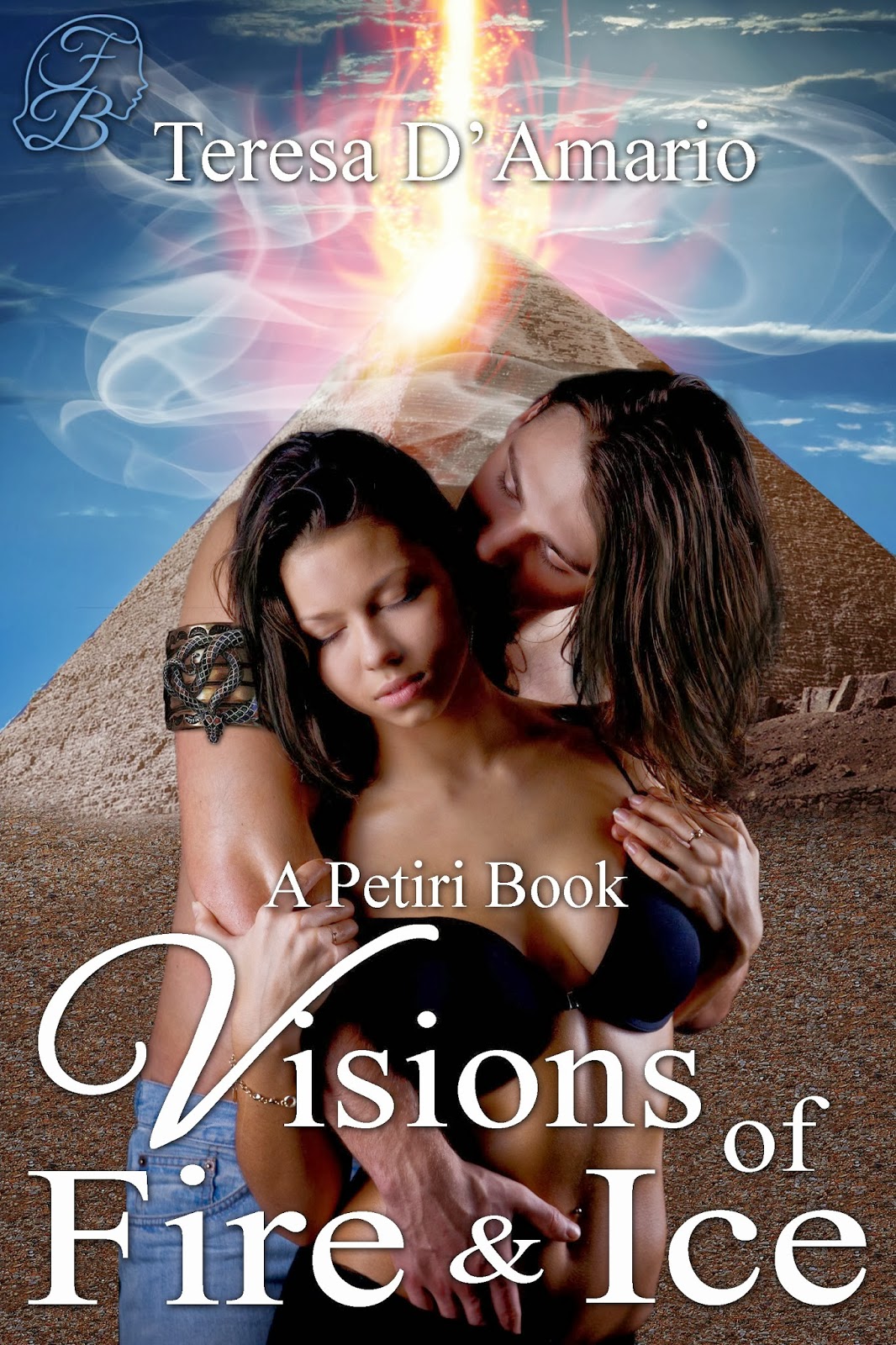 Trapped on a planet not their own, the Petiri spend their lives hiding the natural gifts that set them apart from the world. They live long and unfulfilled lives, unable to find their soul mates on this backward planet known as Earth.  That is until the night Ramose comes face to face with Tamara, a woman whose gifts rival his own.  Determined to find why this human is in possession of an ancient magical Petiri relic, he arranges a meeting.

But Tamara, embittered from past events, is wary despite lifelong dreams of Ramose and a sure knowledge he is her soul mate.  Before long the couple find themselves ensnared in a battle that has raged for millennia in Egypt’s desert.  Set, Egyptian God of Chaos, is determined to take his just due: the throne of Osiris.

The only way to stop him is for Ramose to put his trust in Tamara, but first must gain the same from her.  The ensuing sensual relationship is filled with romance, lust and love.  Their relationship is tested by an unnatural evil. Will her powers over fire, combined with his ice be enough to win the day?  Or will the ancient gods and goddesses of Egypt destroy more than just their love?

Ramose ducked and twisted his body, avoiding the flailing fist surging forward to contact with his jaw. With one quick upper cut, he cracked his opponent beneath his chin. The man’s head jerked back, blood spurting from a bitten lip.

“Had enough yet?” asked Ramose.

Darius spat, his bloody spittle spattering the blue floor mat. “I had enough a long time ago. But, then again, you need to have your ass kicked lately.”

Ramose grinned. “Let’s see you try,” he said, snatching a pair of swords from the rack on the wall and tossing one to Darius. He was the Master of Defense for his people. He was responsible for teaching them the in’s and out’s of self-defense. It was what kept them alert and safe.

At least, he liked to think it was what kept them safe. It was probably more luck than anything. Unlike their arrival on this planet more than three thousand five hundred years ago.

“I still don’t understand why you find it so necessary to teach me combat,” repeated Darius for what had to be the fifth time since they’d begun. Ramose sliced forward with his blade, and the man danced away. The sharp edge whizzed past Darius’s ear, slicing a few hairs from the side of his head. The man didn’t blink, but readied his sword for the next attack. “I’ve lasted this long without it, why now?”

Impressed with his pupil’s quick defensive moves, Ramose charged, sending the man off balance. He needed this as much as Darius did. Inside, his nerves sang with an intensity he couldn’t begin to understand.

Darius dodged his advance with a neat parry.

“I’ve told you, things are changing.” Gods, how he wished he could give a good answer. So much remained hidden. Premonitions had haunted Ramose’s thoughts for most of his life. Tiny inklings of a future to come. Images or feelings which were never clear, details blurred beneath the mists of the unknown. Right now, he had the odd sensation of danger. And the focus was Darius.

“You’ve been dreaming about her again, haven’t you?”

Ramose frowned, and parried, the slide of blade against blade vibrated through his muscles. “My dreams are unimportant and have no bearing on your future.”

Darius spun and Ramose blocked. “So, what’s it like, seeing your Kha-Ib?”

Like the rest of those on board the doomed Petiri vessel, Ramose had left any possibility of finding his Kha-Ib on Petiri, waiting for his return. He’d never met her, but he’d dreamed of her since childhood. The woman in his recent dreams couldn’t be older than her mid-twenties. In most of the dreams, she was no more than a child in her teens. Too young and too human to be the heart of his soul.

“She’s not my Kha-Ib,” Ramose grumbled, slicing toward Darius.

“Whoever this woman is, she haunts your sleep the way a ghost haunts an old graveyard. Elo is trying to tell you something.”

“Our god deserted us the moment we arrived on this backward planet. He’s telling me nothing.” Their blades clanged together, and they both leapt back.

“You’re deluding yourself, Ramose. And, until you admit it, you will never find peace. Whoever this woman is, she’s not your wife.”

Ramose rewarded the verbal jab with a physical one of his own, spinning about and slamming a fist into the man’s solar plexus. The sudden flinch in Darius’ face was a little too satisfying for comfort.

He’d never loved his wife, not the way a Petiri would love his Kha-Ib. True, every Petiri dreamed of his Kha-Ib, just like he had. Years ago. But those dreams had stopped the moment he’d given up on ever finding the one meant for him.

Loneliness had wrapped its velvet fist around him, driving him to long for what he would never have. He’d decided to accept second best. Everything had gone horribly wrong. No matter how hard he tried, he still couldn’t forget the anger brought on by his wife’s death. A death she’d intended for him. Anger at the memories coiled in his gut.

Ramose balanced on the balls of his feet before striking forward again. Their blades crashed together, their song of battle echoing through the room, sparks flying.

Ire burned in Ramose’s gut, and his knuckles turned white on the pummel of his sword. Darius was right. The dreams were getting to him. Dreams of a young girl in peril, with a face he could never see. A human face.

Born in Atlanta, the daughter of an Army Soldier during the early stages of the Viet Nam war, I spent my childhood traveling from state to state, finally ending up overseas in Germany where I graduated high school six months early.

My writing career however began as a young Airman in the Air Force, writing monthly articles for the weekly base paper.  The articles ranged from climatological data to full center fold articles on the destructive forces of hurricanes.  As I increased in rank, my writing changed to more technological instruction, including such works as WSR-88D Doppler Radar Data Interpretation Guide for North Carolina Stations, and Station Operating Procedures.

But my early writing wasn’t limited only to the technological side.  I’ve written multiple dog training and behavior articles for canine websites such as Sonora Canine Freestyle, and also the Ask Blackjack column, a fun training column in the voice of my labrador retriever, then a young pup.

I’m married to a wonderful man named Doug, who is also retired Air Force.  We live in North Carolina with our two dogs.

Be sure to enter for a chance to win a $50 Amazon or Barnes & Noble gift card! 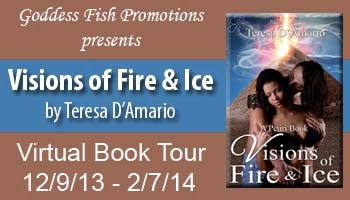