Interview with Brae Wyckoff, author of The Orb of Truth 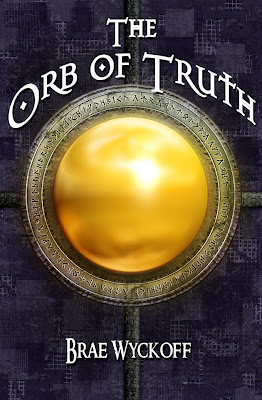 In the hundreds of years since the Holy City disappeared, darkness has fallen over the land. Human kingdoms have seized control of the realm, scattering the other races into hiding.

Bridazak, a skilled thief, and his friends a dwarf and a fellow ordakian, have dared to remain within the human communities and live relatively quiet lives, until they discover a mysterious, magical artifact. The three friends are thrust into an adventure that will challenge their faith, their purpose, and their destiny as they chase a forgotten and lost prophecy across the realm of Ruauck-El, where they hope to discover the origins of the strange item and their place in its history.

An ancient, unknown enemy threatens the completion of their journey at every turn. Bridazak is about to face the biggest adventure of his life, one that may change the known realm, and answer the questions he has carried all his life. Will they unlock the truth?

While fantasy isn't usually my preferred genre, I have to admit that I'm really glad I got the opportunity to read this book!  It was really enjoyable and most times I had a hard time putting it down when it was time to re-enter the real world again.  I have only read a few books in this genre and I would say that this one is probably the top of that list.

While some things confused me (I'm chalking it up to not having a good base knowledge of the sci-fi/fantasy world - I don't think watching the Labyrinth numerous times throughout my life counts), it was still easy for me to follow the story and mostly understand what was going on.  I enjoyed learning about the different characters and the descriptions of the land were wonderful.

I would recommend this book to anyone, even if it isn't their cup of tea - after all, it wasn't my cup of tea either, and I quite liked it!

Beckstar Reviews:  How many books, as of right now, will there be in this series?

Brae Wyckoff:  All I can say is that I have many planned. It won’t be just three or four. Once I get a gauge from the fans on which characters they want to read about more then I will gravitate the stories toward them.

BR:  What were you doing when you got the idea to write this story?

BW: I grew up playing Dungeons and Dragons and my first character was Bridazak. That is where it all began and when I first met this Ordakian (Halfling). Bridazak and I have been stuck at the hip ever since and it has been a long journey of over twenty years getting our story written.
It was a little over two years ago that I lost my job suddenly. I worked in corporate America in management and that was the turning point to go full-time writing. I have not looked back.

BR:  What do you do when you experience “writer’s block?”  What gets the creativity flowing?

BW:  For me, I tap into music. There is something about the lyrics and the rhythm that I flow with when writing. Even now, Adele is playing in the background as I go through this interview.
In the last twenty years I could only finish half the story of The Orb of Truth which was quite frustrating. The month leading up to my sudden lay-off, I had a divine encounter. I asked God to help me finish The Orb and I felt a strong impression that “It was TIME”. I felt that I heard Him say it will happen in 2011. January 10th, 2011, I lost my job. God didn’t tell me about that part…LOL. We wrote the book in six-months.

BR: I have to say that I am a huge Adele fan and can completely understand how she can be inspiration, along with many different artists.  What is your favorite movie and why?

BW:  Star Wars: Empire Strikes Back (original) is my favorite movie. My nickname is Jedibrae. I have been an avid Star Wars fan since I was six years old when my dad took me to see SW in the theater. It was the second movie that took it home for me. The emotional turmoil for the heroes struggling against the massive Empire and the epic conclusion of Han Solo frozen in carbonite and Luke finding out that Darth Vader was his dad. WOW…I was nine at the time and this impacted me greatly.
Some people ask me,“Why don’t you write Sci-Fi then?” My answer to this is, I will, eventually.

BR:  Have you ever been to a Turkish prison?

BW: In Turkey, there is a place called, Khaliim, which when translated says, “The Walking Dead”. To answer your question, no, I have not been to this place because it doesn't exist. I just made it up.

BR:  What is your favorite Jelly Bean flavor?

BR:  Yum!  I'm a huge fan of that flavor as well.  Although, I prefer Strawberry Daiquiri or Buttered Popcorn.  If you woke up as an animal tomorrow, what would you be and why?

BW:  I overlook the valley in Vista, CA and in the distance I can see the Camp Pendleton Mountains. Hawks soar overhead and perch some twenty feet away from my house overlooking the area in search of their next meal.
I have envisioned myself being that soaring hawk or eagle. I want to soar over the land and feel the freedom of flying.

BR:  That has always been one of my dreams.  In fact, I frequently dream about flying over many different places.  It would be exhilarating!  If you could switch lives with one person, dead or alive, for one day, who would it be?  Why?

BW:  The Apostle John. I mean this guy walked with Jesus and then saw the Kingdom of God and tried to write what he saw in the book of Revelation. I want to take a peek inside that mind.

BR:  I have to admit that my husband has asked me this question before, and I answered very similar to you.  I don't really care which person I am for that one day, I just want to go back and see some kind of proof of it all.  I grew up in a Christian home, and while I don't believe 100% of what is said in the Bible, I still have hope that someone as amazing as that did exist.  It would definitely restore a lot of my faith in humanity. You know what I mean?

Now, your final mission, should you choose to accept it – you are terminally ill and have only three months to live.  Where would you spend your final days?

BW: Of course, with my family. I would be surrounded by intense prayer warriors. I see the miraculous happening daily around the world so being terminally ill is not something where I would live in fear.  Two reasons.
1. People are being healed through prayer daily (Stage 4 cancer, death, terminally ill diseases) and it is doctor verified. (I report on these miracles on Facebook. It is called The Greater News)
2. We are ALL terminally ill in life. Each day we move closer to our final breath in this world, but those who know their final destination do not live in fear but instead look forward to our next adventure.

When you read my books, you will experience my faith woven throughout but in a way that will not overstep or make you feel uncomfortable. I write to entertain and you will get a great ride when reading The Orb of Truth. My second of the series will be coming out later this year, called The Dragon God, and it will be even better than the first.

Come join the adventure and fall in love with the many characters. You won’t be disappointed.

Brae Wyckoff was born and raised in San Diego, CA and is working toward a Psychology degree. He has been married to his beautiful wife, Jill, for 20 years, and they have three children; Tommy, Michelle, and Brittany. He has a beautiful grandson named Avery.
​
Brae has been an avid gamer since 1985. His passion for mysterious realms and the supernatural inspired him to write The Orb of Truth, the first in a series of fantasy action adventures. Brae describes The Orb of Truth as a cross between the Lord of the Rings and the Wizard of OZ where you will be swept away into a magical land of Dwarves, Elves, and Halflings.

Buy The Orb of Truth on Amazon!